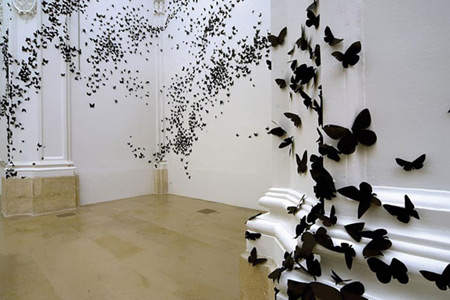 The title of this bright and bold survey of contemporary Latin American art sums up aptly the many social, political and cultural dualities in regions to the south in the last six decades. Consider the military dictatorships, revolutions, fledgling democracies and mass emigrations, among other events. In short, there has been both order and chaos - at times in a precarious balance.

In this heralded collection from Phoenix philanthropists Diane and Bruce Halle, it’s easy to be invigorated by the outpouring of art amid all this order and chaos. And it starts with the eye-popping lead-in to the exhibition, Mexican artist Carlos Amorales’ “Black Cloud,” a veritable swarm of black moths and butterflies made from cut paper. The 30,000 bugs are tacked to the walls and ceilings heading into the main gallery. Chaos, yes; but certainly Amorales chooses a pleasing order for his placement of the swarm.

The energy continues on, with several stand-out pieces that compel viewers to interact with the art. For instance, in “Transchromies,” Venezuelan artist Carlos Cruz-Diez presents six columns made of colored Plexiglas slats, standing about seven feet tall. The idea is to walk among the spaces between the columns and marvel at how basic colors mix with light to create magenta, emerald and other hues. Also inviting participation is a surprisingly poignant installation, “Untitled (Rossmore II)’’ by Cuban-born artist Felix Gonzalez-Torres, in which wrapped green candies are spread on the floor, meant for museum-goers to enjoy. In truth, the ever-changing and continuously replenished mass represents the passage of time which, as the label explains, the artist has felt deeply since losing his partner to AIDS.

Commanding its own wall is the painting “Lover” by Arturo Herrera of Venezuela, with its loose red forms connected by veins, almost like a supercharged Valentine’s greeting. The splashy elements give way to the somber, however. The many upheavals in Latin America’s history come through in a piece such as “Atrabiliarios (Defiant)” by Colombian artist Doris Salcedo. Shoes that belonged to “the disappeared” of her country are displayed in niches in the wall, barely visible behind stretched cow bladders.

The large-scale, richly colored “Rafter: Hell Act II” by Cuban artist Luis Cruz Azaceta is an arresting reference to the era of Cubans escaping to America in small boats. A figure in a raft is seemingly caught in black eddies, trying to follow a blue path. Works by other Latin American artists examine racial discrimination, poverty and the cruelties of war.

Less successful in conveying any clear message is Brazilian sculptor Antonio Dias’s “The Space Between,” consisting of a black granite cube engraved with the words “The Beginning” and a white marble cube bearing “The End.” Perhaps it’s because of the way the work has been placed in the gallery. The exhibition catalog shows a photo of the cubes on a wide open field, suggesting the vastness of the universe. In the museum setting, discovering meaning from the “space between” the cubes - they are about 20 feet apart - must be constructed in the mind's eye.

With more than 50 works, the show offers a fine breadth of artistic output, and the introduction to concepts such as Venezuelan Kineticism and Brazilian Neoconcretism gives off an exotic feel. It’s a journey to far-off regions that’s worth taking, and one that fosters understanding of Latin America’s contrasts.