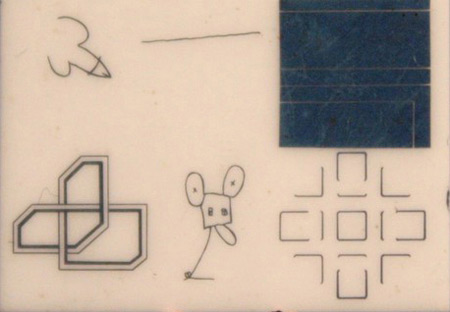 NASA may no longer be putting up those attention grabbing manned space vehicles, but the national space agency is still busy, and its research may well lead us to places that only our imaginations have gone before. In a mere century our cosmological knowledge has radically altered our picture of where we sit in our corner of space, the scale of of what surrounds us and the rich diversity of what the cosmos is filled with. If NASA scientists' most recent data gathered from the Kepler space telescope is even remotely accurate, there are at least 4 to 5 billion earth-like planets in our galaxy, the nearest only about 13 light years away (check out space.com if you are interested). Anyone still think we are alone?

I've thought that it was just a matter of time before we joined the ET club, ever since I was a kid gobbling up all the sci-fi I could get my hands on (back then the triumvirate of Heinlein-Asimov-Clarke shaped our projected future). For some reason visual art eventually supplanted the written narrative as my metaphorical environment of choice, and the wonder of what that cosmological future might hold in store did not diminish. Not that obsessing on the nature of the physical universe is a central concern of visual artists, but wonder and possibility certainly are. Describing what is beyond present knowledge is our stock in trade, and visual metaphors tend to be sneaky and indirect.

Perhaps another story helps explain why. A few years back it came to light that drawings by six artists (John Chamberlain, Forrest Myers, David Novros, Claes Oldenburg, Robert Rauschenberg, and Andy Warhol) were embedded on a ceramic chip and snuck aboard the Apollo 12 lunar module. This was in 1969, and the project engineer who did the deed was, it turns out, hardly the only stowaway on that historic mission. But it was surely the least prosaic. Myers originated the idea and enlisted the artists, and an edition of sixteen chips resulted. After he failed to convince NASA to include one in the Apollo 12 payload, Myers enlisted a Bell Labs scientist, Fred Waldhauer, who secured a colleague on the inside who telegrammed the artist "'YOUR [sic] ON' A.O.K. ALL SYSTEMS GO." I do not expect that the wrong kind of ET nasties will some day discover the artifact and grasp it as an excuse to exterminate the planet.

Amidst the sheer quantity of artifacts of our technology and written material, the Moon Museum serves as a reminder that we also speak a visual language that need not be translated into anything but itself, and what it reveals speaks volumes.

If you are in California and around the Riverside area, you can check out one of the other fifteen Moon Museum chips that remained earthbound currently at the UC Riverside ARTSblock exhibition "Free Enterprise: The Art of Citizen Space Exploration." You will not find pictures of planetary systems, exotic alien illos, or even a now classic "Starfield" image by Vija Celmins. The show helps open a conversation about artists' potential roles in a new era of space exploration that has just begun. NASA has, after all, pulled back from the early, nationalized phase in order for a new wave of private companies to incubate fresh initiatives.

Bradley Pitts, a former aerospace engineer turned artist, floats nude in zero gravity in his "Singular Oscillations:  Playback," metaphorically divesting himself of the dominant gravities of research and profit in favor of a pure experience. "Free Enterprise's" duplicitous title aside, placing the aesthetic agenda of such works in the foreground provides essential moral instruction: how we experience the coming age of space is of greater consequence than how we exploit it. But I have little doubt that the cultural enterprise component will be restricted to the wings rather than placed center stage. At least, until we meet up with our ET compatriots.