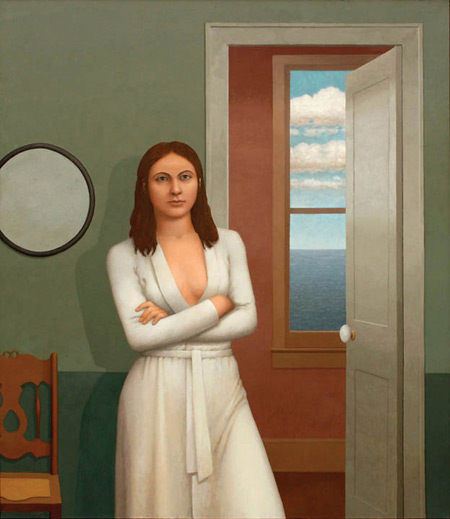 “The Imaginary Still Life of William Bailey” is exactly that. It’s a world imagined rather than re-presented. In other words, no physical objects operated as a mediating influence on the painter. Instead, Bailey conjured arrangements of dishes, accoutrements, shapes — even a persona — and conferred upon them “a local habitation and a name.” He by-passed things understood as “really real” to give us a marvelously crafted world dredged from his own psyche.

Bailey’s work, including “Green Room,” has been linked to the Italian artist Giorgio Morandi and it’s clearly an apt comparison. However, Bailey’s still life paintings put more visual space between objects, while simultaneously evoking a more tightly controlled psychic eeriness than those of Morandi. He achieves a strange geometry of a muted and dampened state that we normally eschew, perhaps out of a sense of self-preservation. Bailey's exquisite rendering politely shakes things loose and, more importantly, invites us to explore the nuanced moments when our overloaded hearts and heads are stalled. "Still" life indeed.