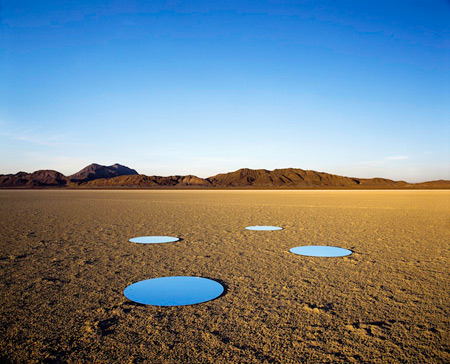 The Dadaist/Surrealist sculptor Jean Arp once expressed the wish that his works be discovered in natural surroundings, presumably to emphasize their biomorphic qualities. Many artists’ wish to return to the land (to use the parlance of the 1970s) has taken various forms in the past half century. Land artists and conceptualists forsook the studio and the making of traditional objects to execute unsellable projects, experiments or even rituals in the wilderness. The process and experience counted, not the product.

Fine-art landscape photography has not abandoned the straight pictorial mode exemplified by Ansel Adams, but the conceptual/performative approach, represented by John Divola, Andy Goldsworthy and Barry Underwood embraces the ethos of earlier land art. Mexican photographer Alfredo de Stefano walks that conceptual path, fabricating and then photographing primitivist tableaux with rocks, branches, fire and light on vast plains in Mexico’s Coahuila desert. His variety of land artworks serve variously, in De Stefano’s words, as “metaphors for the painful desertification of the planet” and “ironic allusions to our relationship with the desert.”

Desertification, of course, may be on the international menu as climate change continues, so the ten photographs selected from DeStefano’s "Replenishing Emptiness" and "A Brief Chronicle of Light" series have a certain topical relevance; it’s hard not to posit an ecological subtext. However, it would be a mistake to see them too narrowly, or as merely eco-propaganda. They’re also poetic explorations of time, measured both in human terms, suggested by technological and ancient or mysterious artifacts (cairns, rings of stones, luminous pools). Juan Antonio Molina calls them in an essay (“The House and the Grave in the Landscape,” Voices of Mexico, Autumn 2011), “inscriptions on the landscape,” referring to DeStefano’s earlier work with text, signage, animal bones and desiccated animals incorporated into the landscape. These archaeological/paleontological ruins or graves are “simulations of monuments,” and “stimul[i] for reflecting about the passage of time.”

Viewers familiar with the Romantic landscape tradition — of Roman and Gothic ruins and toppled statues, of Turner, Cole and Piranesi — may discern a faint fragrance of the shocking, awesome Sublime here.

But perhaps that is aesthetic overreach. De Stefano uses the terms of reclamation, restoration and integration, so he evidently believes in a healing rapprochement with nature. Certainly we can use culture for positive as well as negative ends, so if we can’t face inconvenient truths, perhaps we can face the facts, paradoxically, by viewing beautiful, poetic images. “Polar Circle in the Desert” (1999) depicts a circular enclosure of ice blocks — a little fort — in the sand that is half disintegrated beneath a cerulean sky dotted with scudding clouds. “Mirages” (2002) depicts a series of watering holes, blue as the clear afternoon sky, and completely circular: mirrors; “Circle of Fire in the Desert” (2002), a rim of flame against the blue light of evening, is its opposite. “Firefly” (2003) shows a herd of nocturnal creatures leaving phosphorescent trails behind them: aligned flashlights, switched on. “Light Line” (2004) shows a meandering molten path of light amid desert scrub, probably a time exposure of a radio-controlled car. “Zone of Silence I” (2005) and “Zone of Silence II” (2006) depict craters or lakes from which mysterious lights radiate. The best photos retain some ambiguity, and appear to have been stumbled upon, as Arp wished. At the same time, “literary” props like ladders, clocks, plastic bags and red drapery seem overly symbolic, no matter how strikingly arranged and shot.