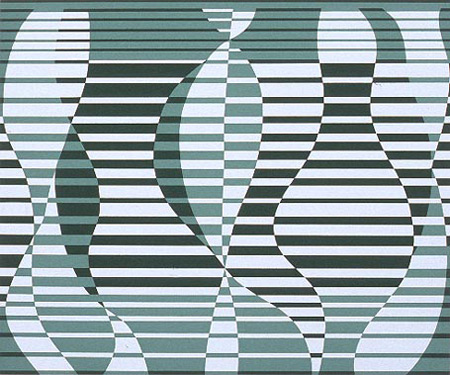 Influential artist and pedagogue Josef Albers is the subject of a thoughtful exhibition of prints.  This generous selection fills the gallery's light-filled front gallery. All of the pieces are culled from two of Albers' portfolios, "The Interaction of Color" and "Formulation:  Articulation." Like the counterpoint compositions of J.S. Bach's "Well-tempered Clavier," Albers' prints served both as etudes to edify students and as masterful works in their own right.

Viewers familiar with Albers' work will recognize his signature rectilinear forms and chromatic permutations in works such as "Folio 1, Folder 28," but may be less familiar with the curvilinearity of "Folio 1, Folder 2" and the folded forms of "Folio 2, Folder 1B." Further, the illusionism of "Folio 2, Folder 21A" is the kind of mind-bending pretzel we are more accustomed to seeing in M.C. Escher than Albers. This exhibition shows afresh what a ceaselessly inventive visual thinker Albers was; indeed, it is impossible to imagine 20th Century geometric abstraction without him.