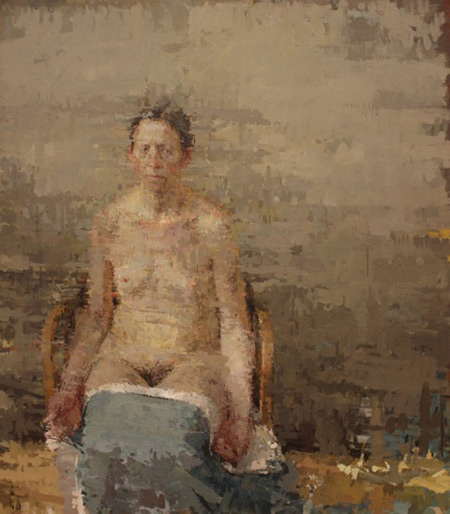 The densely worked, emotionally charged paintings of Ann Gale manifestly rebut any resistance to painterly realism. The sixteen oil paintings here venture into various substrates (canvas, masonite, copper, panel, linen on panel), a pair of graphite drawings, and four works that lie between drawing and painting in oil and graphite on vellum. Friends and acquaintances of the artist pose for these traditional-format portraits — a term that the artist, surprisingly, has only recently accepted. The reason for her resistance to the label may be seen in the works, which defy traditional conventions of portraiture: smooth, polished surfaces or, alternatively, dashing facture serving the presentation of public personality or the revelation of the private person.

Gale’s paintings, which require months and even years to complete, are aggregations of thousands of brushstrokes (Cézanne’s colored oil-paint patches and Giacometti’s feathery, tremulous graphite contours come to mind) that alternate, depending on the viewer’s distance, angle of view and degree of focus, between heavily textured natural surfaces (bark, lichen) and sharply observed studies of atmosphere and anatomy. Look very closely, and a myriad of tiny abstractions spring into view, with every square inch graphically charged with energy. Their character reminded me, to my surprise, of early works by Jaspers Johns exhibited a few blocks away, at the San Francisco Museum of Modern Art, which lavish extraordinary painterly beauty on anonymous, blank, universal numbers, letters, flags and targets. After fifty or sixty years, the intellectual or polemical provocation is no longer important; the visual glory remains. The transitory or even banal appearances of Gale's models are likewise elevated by the painted surface. The sitters may be decidedly unglamorous and unexceptional, middle-aged and weary. But they are captured, immutably, and visually objectified, in Gales’s flickering, close-hued, paint strokes. Fact and artifact coalesce, with both aspects alternating in emerging and “speaking” (though not tauntingly, of course).

It is tempting to construct narratives around Gale’s portraits, so empathetic are we likely to feel toward them, so sympathetic are we likely to find them in our current state of spiritual, political and financial disillusionment. The narrative element is surely valid and natural, the polemic may be more me than the artist. Gale’s subjects are as emotionally varied as the paintings’ viewers — and not intended as personifications of malaise or melancholia, but more, perhaps, of perseverance: Existentialism, American-style. At the very least, masterly works like “Rachel with White Robe (2011),” “Babs with White Ribbons (2007),” “Jennifer with Cream Dress (2012),” “Rachel with Blue (2012),” “Robert Turned Away (2008),” “Jennifer with Blue Dress (2012),” and Self-Portrait with Ribbon (2012)” embody what might be called a psychology of presence arising from the silent rapport between model and subject, which Gale refers to as the “space between.” Gale’s best works successfully bridge that gap, if soberly and sympathetically. Indubitable masterpieces? Our dubious and distracted era no longer believes in such praise; perhaps it should.