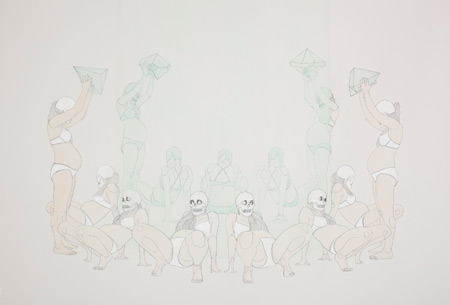 If you’re reading this review, then the much-discussed end of the Mayan calendar has come and gone without the world ending. Beyond such speculation are the multitudes of ink, airtime, and internet ballyhoo devoted to the phenomenon, now mercifully relegated to the dust bin of Y2K-style anticlimax. In Portland, the Mayan end-of-days chatter spurred this imaginative, if uneven, group show, "End of the World."  Curated by Molly Georgetta, the 15 artists here stare into the maw of apocalypse and manage to grin and express pique, embracing both the humor and the dangers of our collective fascination with doomsday scenarios.  Most of the participating artists employ a lowbrow, illustration-influenced style that is generally well-suited to the subject matter, which straddles earnestness and satire.

On the side of earnestness, Clare Rosean’s painting "Morgen is Dead" depicts a handful of tombstones at the periphery of a scorched-earth wasteland, while her compositionally denser painting, "The Shakedown," hints at the mêlée that might have preceded the destruction: a tableau of fisticuffs and crazed animals chasing urbanites, presumably, into the hills. Gala Bent’s "A Bang and a Whimper" also shows humankind’s penultimate moment, although in more abstracted fashion, with a motif that reads as a multicolored schooner or geode poised atop an enormous staircase, about to topple into the abyss.  In "Bridge," Brendan Monroe abstracts the pinpoint moment of mass destruction even further until it is only a spincter-like orifice, incongruously hued a cheerful seafoam green.

Other artists in the show opt for whimsy in portraying the doomsday cults that traffic in spurious theories such as the Maya/2012 meme. In the painting "Oracle" by the collaborative duo known as AM-TK (Andie Mazorol and Tynan Kerr), several eerie, staff-wielding figures communicate with one another via an arcane, Ouija board-like surface.  What are they communicating? Who the hell knows. In a similar but more thematically realized fashion, Joseph McVetty III, in the works "Signs in the Sky" and "Message from the Dead," draws and paints cult members dressed in diapers and skull masks, gathered round crystal geodes shot through with rays of colored light. Perhaps they are hailing the mothership to ferry them off to another dimension just in the nick of time. Creepy sexual undertones abound; some of the figures are pregnant women in a circle formation, all doing back-bends, legs gratuitously spread. While McVetty’s approach is clearly tongue-in-cheek, he does not seem merely to mock those who would propogate cockamamy theories, but rather — or simultaneously — to caution against the brand of impulse that has led to historical tragedies such as the Jonestown mass suicides of 1978, the Heaven’s Gate suicides of 1997, and cults with charismatic leaders such as Bagwan Shree Rajneesh and David Koresh.

Not all the works in the show handle this loaded subject matter with such spot-on instincts. Amanda James’ "The End is Nigh," with its vignette of a dinosaur reading the newspaper as a meteor hit looms, aims for Outsider naïveté but achieves only base amateurism. Pat Perry’s "Out in the Yard" reaches for sinister, Andrew Wyeth-inflected realism, but while the piece is technically among the exhibition’s most assured, its connection to the show’s theme is far from apparent. Ditto for Steve Seeley’s untitled depiction of a rifle-wielding "Batman" and for Jacob Markrof’s "King’s Advisor," a portrait of a talisman-brandishing falcon anthropomorphized and draped in a hooded cloak. Simply to depict peanut-brigaders wearing costumes, engaged in hokey rituals, does not suffice to convey the popularity of Armageddonism across many sects. The Mayan would-be apocalypse will soon enough (perhaps already has) become a footnote in the cultural history of the 2010s, which will be perfunctorily recollected in the 2020s version of VH1 nostalgia programming. But chances are the perniciousness of cultism will persist in ways that are not so amusing. Aesthetically and socially, the artists in "End of the World" succeed and fail to the degree that they keep one eye warily open, even as the other winks.