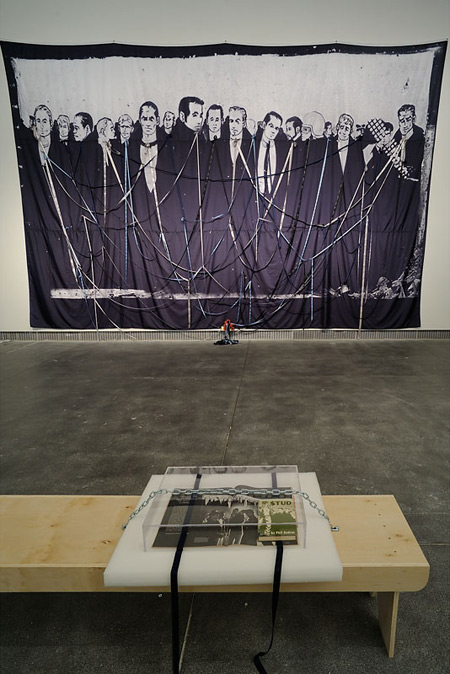 Nayland Blake, ''FREE!LOVE!TOOL!BOX!'' recreation of the mural by Chuck Arnett which decorated the wall of the Tool Box leather bar in San Francisco during the 1960s. Photo credit: J.W. White.

Performance artist Nayland Blake presents five areas or “stations” as they’re titled. Several stations call for viewer participation, resulting in “action sculpture,” which is artwork formed as viewers add to it. Thus, the show largely provides the viewer space to work “with” the artist in the creation of the show. Blake currently resides in New York but called San Francisco home from 1984 to 1996; during that time, he was pivotal in the Bay Area performance art scene. A primary focus of the artist has been sexual and racial identity, specifically queer culture in San Francisco. Blake revisits these topics, especially that of identity by way of choice, experience, and materiality.

One station asks viewers to donate an item that has meaning to them; all of the items — ranging from CDs to a Giants T-shirt, a bra to a child’s leather jacket — are displayed on shelves that cover a large wall of the gallery. Not only does this provide contributors the opportunity to consider what material possessions they each imbue with meaning and why, but also to consider that which is important to others.

Another station is a video booth at which participants are asked to consider various questions, make a videotape centered on answering some or all of the questions, and then share the video on the YBCA website. In a different form then, topics of experience and identity are once again plumbed and shared. This show is as much about self-reflection and self-contemplation as it is about considering those around us. It's not unlike the development of identity, as well as community formation.