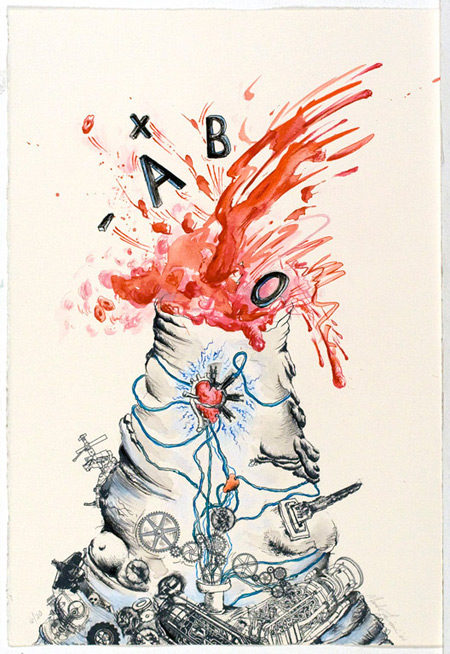 Letters, the ABC’s of the alphabet are the unifying element in this exhibition of paintings, drawings, prints and sculptures by a large group of approximately forty contemporary artists who have either worked in or are from Los Angeles. The subjects of "Letters from Los Angeles: Text in Southern California Art" appear here as shapes, as typography or, as a text signifying or interpreting the work of art or as a statement interpolated into the image or content of the work itself. Co-curated by Aldis Browne with Jack Rutberg, this show addresses letters and text as they pertain to the Los Angeles’ cultural landscape, as omnipresent elements in the billboards that confront us on the boulevards, through the freeway signs, and as graffiti.

These signs are markings in and of the landscape of this city. "Letters from Los Angeles" brings together many artists who have explored that mirror of Los Angeles in their work. Ranging from the iconic - the “Hollywood” sign, entertainment industry studio logos - gang graffiti sprayed on walls and fences or tattoos adorning the skin of its inhabitants, letters and texts have become symbols of L.A., instantly calling the city to mind of millions. Still, these works are not limited to a formal element within painterly statements. They serve as aesthetic signifiers in their own right. Whether functioning as a typographical symbol or as a syntactical phrase, they present a narrative about places and concepts unique to Los Angeles.

Historically this aesthetic first appeared in the cabaret posters of Theodore Steinlen and those of Henri de Toulouse-Lautrec, a pioneering blend of art and commercially conceived graphics. Its continuity was established by radical twentieth century artists in ways that constituted both exploration and experimentation of creative space using language as image or as a semantic image communicating verbal meaning through the work of art.

This is precisely what comes into focus in two of the works on view here. In Ed Kienholz’s “FOR $990.00” the title appears in black letters and numbers against undulating bands of horizontal white and blue lines, perhaps, an infinite sky. Is there a price tag on the famous blue Los Angeles’ sky or on infinity itself? This work exemplifies Kienholz’s uncompromising interrogations of societal moral disjunctures, and the “everything has its price" narrative that underscores his vision of Los Angeles.

Ed Ruscha’s print “Landmark Decay” and “Further Landmark Decay" comprises two images of the iconic “Hollywood” sign that appear on the same sheet. It imagines the Hollywood icon as doomed to decay and oblivion. If the Kienholz image places a price on the sky, in Ruscha’s vision the symbol of the fantasy industry that seduces the world is reduced to a twisted mass of meaningless letters.

While these two examples draw on the space and iconography of the city, Gajin Fujita’s "Demon Hanya (State I)" dons the skin of its inhabitants. Demon Hanya is a female demon consumed by jealousy. This mythological creature is vampire-like, a masked character of the  Noh theatre. In this version her face is blue-black, for she is in the wrathful State I. Red-faced, she is at her most dangerous. Her name hangs around her neck in graffiti lettering. In subcultural Los Angeles she wanders around as a tattooed image adorning select inhabitants in the ongoing transient narrative of skin art.

Raúl Guerrero’s “La Florida” retrieves historical references to the reclining female nude, the Odalisque, simultaneously interpolating a world drawn from beyond our southern border. A reclining nude lies facing a mirror held by a voluptuous Cupid. Framing them is a half-rendered heart that appears and disappears amidst the sensual haze that floats over the scene. ”La Florida” narrates a journey, a map of a landscape adorning her body with precisely tattooed place names in Spanish: Álvaro Nuñez Cabeza de Vaca (the Spanish explorer and chronicler of the Northern Territories now known as the American Southwest), El Paso, Sinaloa, Coahuila, Tascalga. The mirrored reflection of her face gazes at us through vaporous words that trail across the space "The effects of alcohol ... active population.”

These four examples only suggest the vast territory that begins to emerge in "Letters from Los Angeles." It is a landscape of letters, words, phrases and signs that occur within multi-faceted views. At times ironical or grim, playful or arresting, reflective or sensual, they reveal elements of the personal views conceived by a community of artists felicitously interpreting the same space.