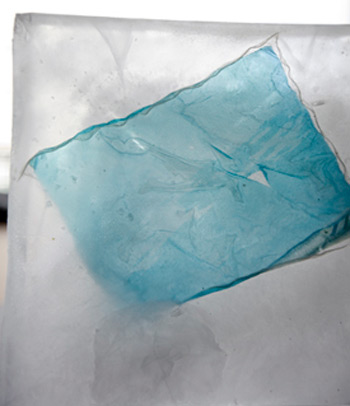 Bachelard's "Poetics of Space" could be a primer for the works Serrah Russell and Maggie Carson Romano produced in an effort to document the elusive traces of bodies and memory during a stay at Pacific Motel in Westport, Washington earlier this year. The two artists spent three days at the motel, then parted ways (Russell lives in Seattle, Romano in NYC). In the following months each independently created works based on memories of the experience.

Turns out a motel, with its peculiar and rich banality, its comforting sterility, is the perfect place to go mining for the poetic ephemeral. Pacific Motel is filled with a variety of delicate offerings: collage by both artists, photographs, and Romano’s fading wallpaper, designed using digital images sourced from the motel. Russell’s instant film photos are trapped in sculptural installations doomed to evaporate or fall apart over time. A Polaroid, for example, is trapped in a block of ice (made from water sourced from the hotel swimming pool) that melts slowly into the seams in the gallery’s cement floor.