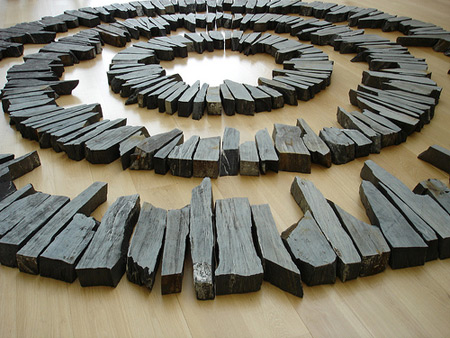 “Rediscoveries: Modes of Making in Modern Sculpture” encompasses an array of names that lay claim to some of the most impressive chapters in art history texts. The exhibition includes works by Claes Oldenburg, Richard Serra, August Rodin, Jean Arp, Ellsworth Kelly, Constantin Brancusi, Henri Matisse and a list of other equally impressive artists. However, there exists an ardent curatorial desire to group these works in distinct ways, i.e., modules and repetitions; wholes and parts; machine aesthetics; and everyday objects. While this is an interesting approach for arranging what is a small but stellar collection, if you jettison those notions you’ll be the better for it. Forego the urge to superimpose predetermined import upon the exhibition and simply open your heart and mind to some of the most fabulous sculpture available anywhere.

One case in point is Naum Gabo’s “Constructed Head No. 2.” It usually resides outside the interior galleries — but moving it merely a few yards, and to a pivotal point in the show, unleashes its rock-you-back-on-your-heels appeal. Emblematic of the Constructivist movement in Russia, it’s a behemoth experiment in space, shadow and curved surfaces. Like many of the works in this fascinating show, it exerts a totemic quality that’s riveting and, au fond, slippery. It defies verbiage because it resolutely takes over space, psyches and emotional territory. It does precisely what great art is supposed to do.

A number of works by Alberto Giacometti include depictions of his brother, Diego. Each shows the artist’s model in diverse ways and each is an attempt to capture the subject’s essence. They exhibit a kind of contained frenzy. By turns, they’re attenuated or daubed with thick, undulating surfaces that are lucent and ambiguous. They operate as excursions into how artists perceive a subject and how what’s comprehended, for all its complexity, is pared down and conveyed. But, again, it might be wise to forget that, too. Simply look at the mottled surfaces and feel the weight of the broad bodies that provide ballast for smallish, attenuated heads. It’s as if the latter are tethered rather than fully integrated into the whole. It could be an examination of mind-body dichotomies — or, more likely, simply a means of honoring and preserving the essence of someone deeply loved.

Another piece that is impossible to ignore is Richard Long’s concentrically arranged “Midsummer Circles.” Constructed of slate in 1993, it exerts a force that feels thousands of years old. It’s less art than axis. It pins you to space in ways rarely experienced outside sites such as Stonehenge. It’s simultaneously highly intricate and remarkably simple. It’s an example of the kind of geometry that posits viewers in a space that feels sacred.

Ellsworth Kelly’s “Untitled,” is a pared down and elegantly curved staff that it invites a tribal sensibility. It’s a reminder that what distinguishes our human romp in the world is oftentimes defined by verticality. In the same way that we marvel at constellations and landscapes, we also contemplate the conjunction of the two.

Raymond Duchamp-Villon’s “Large Horse (Le Cheval Majeur)” is yet another stunner. It shows the curvature of a horse’s haunches and neck morphing into a machine. It’s a fusion of techne and the physiognomy of one of the most glorious creatures one can behold. Horses, of course, are often the stuff of myth. Here, the animal shape becomes smooth and geometric without losing any of its import. It remains a kind of distillate of archetypal imagery. “Large Horse” both contains and projects what it portrays. What we see is spilling forth from a deep, rooted core. That is hauntingly spectacular — as is the show as a whole.