DOWN TO EARTH: LAND/ART in New Mexico
Feature by Marin Sandy 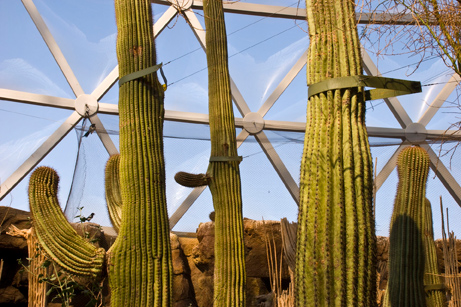 On June 27, a small non-profit contemporary art space in Albuquerque, New Mexico, quietly launched a six-months-long series of exhibitions examining human relationships to the land. Three years in the making, the LAND/ART projects organizers were depending on cooperative ties established among the city’s various arts institutions to create a larger impact than would usually be possible in a town not known as an arts center. The nebulous network of groups, each linked to curators who in turn selected artists and specific proposals, would support an appropriately wide range of work attacking the ever-expanding category of “land art.”

Perhaps it was the expansive desert sky, or the free-flowing creativity evident in much of contemporary land art, that led to the unintended consequence: By the time LAND/ART actually opened an exhibition, the project itself had become a macrocosm of the concepts it put on display. It made connections across implied boundaries, rearranging assumptions about how art institutions should be positioned and how they interact, and laying bare some of the assumptions that tend to thwart cooperative programming. And as the exhibitions continue through November, LAND/ART is arising as a new kind of art space: a virtual, discontinuous, shape-shifting terrain, more conceptual than architectural, with a reach that has already become global in scope.

Ben Delevoye’s Air Cube may best be described by what it is not. It is not anything, except an empty space flanked above and below by the square end of a pedestal and a hanging platform of the same horizontal dimensions. That the mind automatically connects this de facto floor and roof with imagined walls, effortlessly envisioning a cube in the space between them, is a simple enough point. But in context, the title piece in “Air Cube+, a global perspective”—this summer’s group show at Albuquerque’s Richard Levy Gallery in conjunction with the LAND/ART project—became much more. The piece pointed to the presence of air as well as implied boundaries reaching well beyond the artwork and into the entire room, city and planet. Taken as part of sprawling, open-ended LAND/ART, it became map-like—a simplified representation of a territory that revealed some specific truths and, in doing so, hid others.

“There’s a real power there in the map,” said artist Bill Gilbert about his own work with maps, “because it’s an expression of how we think about the land and therefore how we act on it.” Next door to “Air Cube+” on the downtown strip of Central Avenue, at the nonprofit art space 516 Arts, Gilbert’s Matter of Fact: Walk to Work piece in its “Second Site” exhibition contained a map made of dirt and gravel poured in a shallow rectangle reaching across a portion of floor—a sort of sand painting of the transect the artist walked as a performative piece. Gathered during his three-day trek across the desert, into the heart of Albuquerque, from his home in tiny Cerrillos to his office on the UNM campus, this display complemented a wall-mounted loop of video footage that placed the viewer in Gilbert’s own footsteps. “Bringing the territory into the map” like Delevoye, but in a very different manner, Gilbert added one more voice to LAND/ART’s dizzying artistic inquiry into the psychology of geography and its impact on how we live in the world.

Neither of those pieces, however, nor the work in Gilbert’s related solo exhibition, “Physiocartographies” (August 28 to December 20 at the UNM Art Museum), nor any of the innumerable other artworks in the series, can be isolated to exemplify the vast and varied whole. Besides Richard Levy Gallery (the only business involved in the project) and 516 Arts (the coordinating entity), the series encompassed 25 participant groups, including five museums, six contemporary art spaces, one cinema, one performance space, the City of Albuquerque, the University of New Mexico, and various civic and activist groups. The exhibitions range from ambitious conceptual surveys like “Experimental Geography” (at the Albuquerque Museum through September 20) to solo shows with specific environmentalist messages, like Michael P. Berman’s “Grasslands” at 516 Arts from October 3 to December 12.

Yet, like at least one individual piece, the entire LAND/ART project may best be described by what it, too, is not: It does not strictly fall within any existing art-world modes for showing work. And weirdly enough, this seems to have happened not according to plan but by accident—or at least, like any evolution, by
a series of coincidental and serendipitous events. As such, that loosely structured whole, emerging from a conglomeration of institutions, is perhaps the strongest and most innovative—artistic statement that LAND/ART makes.

As is common for organic processes, the LAND/ART project took years to coalesce. Inspired by New Mexico’s prominent position in the 30-year history of the Western land-art movement, as the home of some of its most significant earthworks (including Charles Ross’s Star Axis and Walter De Maria’s Lightning Field), the concept of a collaborative land-art exhibition series was first envisioned in 2005 by Robert Peters, a retired architect and arts supporter active with the Contemporary Art Society of New Mexico. In early meetings, members of the Society discussed a much smaller, simpler effort to facilitate a partnership between the University of New Mexico’s Land Arts of the American West program (founded in 2000 by Gilbert, who is still its director) and one of the city’s two major art institutions: the Albuquerque Museum of History & Art or the UNM Art Museum.

But lacking a single coordinating entity, the concept didn’t get off the ground until March 2006, when Suzanne Sbarge, executive director of 516 Arts, stepped in to take over coordination, fundraising, marketing, and much of the program development. Kick-started by a seed grant from the Albuquerque Community Foundation—from a single anonymous donor with a strong interest in the subject—LAND/ART quickly took on a life of its own, expanding organically from the five founding organizations as others in the area’s arts community heard about the project and asked to participate.

Sbarge and the other key planners, including Gilbert and curator Kathleen Shields, decided to let it grow, accepting proposals by groups in the Albuquerque area (and a few in nearby Santa Fe) that seemed to fit within their goals. By the time the first participating show opened in June—more than three years after Sbarge came on board—those goals had expanded as well. “Our project definitely pays homage to the leaders of the land-art field,” said Sbarge in her office at 516 Arts in July, while preparators painted walls and hung work for “Second Site” in the adjacent room, “but it really looks at what’s happening now, and different directions artists are going with site-specific work in the land.” Between what she described as “a whole range of very high-end artists and curators working in the system, and people in the community improvising on this theme,” LAND/ART reached toward contemporary land art’s outer limits, showcasing its major current trends but also revealing some of its ideological fissures and mapping its movement into the 21st century.

“It’s sort of a cultural pause, in a way,” Gilbert said about what themes and approaches he saw emerging at the forefront of LAND/ART. “A move from monument making to a much more ephemeral, subtle, gentle approach to the environment and toward reinterpreting what has been done; to present to the culture what it has done to the land.” As examples, Gilbert described pieces from “Dispersal/Return: Land Arts of the American West 2000–2006,” one of LAND/ART’s core exhibitions which includes work by 20 of his former students, at the UNM Art Museum and at sites around the campus, from August 28 to December 20. Nina Dubois and Jeanette Hart-Mann’s “composting sculpture”—a mound of grass-covered earth adjacent to the student union building, inside which food waste composts while cameras film the process—embodies these trends and brings the experience indoors with related gallery installations. “The question of ‘How do you bring the people into the experience?’ is the key,” said Gilbert. “That is part of that shift. Turrell doesn’t want anybody at Roden Crater; those guys are in a very different relationship [with audiences] than this younger generation.”

Sbarge admitted to encountering some resistance from planners who preferred to keep LAND/ART’s focus closer to the more traditionalist vision of the land art movement’s founders in the late 1960’s and early 1970’s. But it seemed inherent in the top-meets-bottom, community-minded structure of the project that it would popularize those somewhat proprietary ideas. And if it was to do so, it would need to throw the door open for unlimited interpretations (although the project did keep its focus on land-based environments, despite the possibility of including art exploring built and virtual environments as well). “Does ‘land art’ even mean anything, in terms of what people are doing right now?” Sbarge asked. “It’s a historic term, in a way, and there’s not really a term for what’s going on with the way people are exploring all kinds of environments, with nature being very central. I think it’s something the whole field is struggling with.”

Neither Gilbert nor Sbarge claim to provide any such answers, but if there was any doubt about how far these struggles have reached, LAND/ART put that, at least, to rest. Artists from as far away as Germany have participated, such as Marc Schmitz, whose enormous fabric sculpture Spaces for Open Minds graces Tiguex Park through October. Key exhibitions, too, were birthed in locales as far-flung as Antarctica: Erika Blumenfeld’s “Early Findings: Artifacts for the Polar Project,” shows from September 11 to October 24 at Richard Levy and complements multimedia artist DJ Spooky’s “Terra Nova: Sinfonia Antarctica” performance, October 24 at the KiMo Theater. LAND/ART’s visitors have proven to be just as intrepid. “People were just showing up from Amsterdam, Germany, Canada,” Sbarge told me with a baffled look. “They’re coming here for this.”

Perhaps she shouldn’t be so surprised. The issues at the core of the project, from environmental degradation to the drawing of national boundaries, have been making headlines for decades, in the form of changes, both cataclysmic and invisibly slow, that have uprooted families, sparked wars, and led to a system in which the people who work to save the planet do so from computer desks. As the land art legacy continues to spiral outward into all manner of reexaminations of what it means to be a person on this planet, the questions LAND/ART addresses are, as they say, in the air—not just inside Delevoye’s Cube but over every inch of the earth.