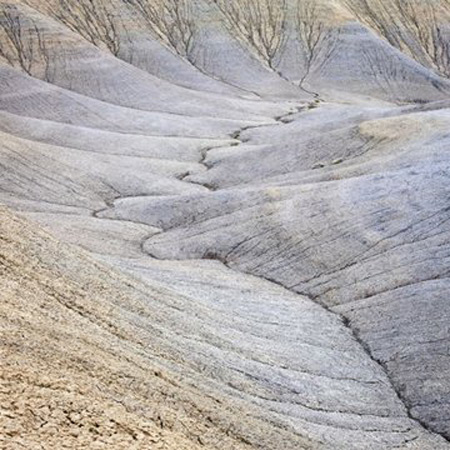 Stephen Strom’s background as a Harvard-trained astronomer is marvelously evident in this retrospective exhibition of his subtle and elegant landscape photographs. His career trajectory as a photographer and scientist forms a fascinating symmetry; the keen eye he uses to study the mysterious details of the night sky finds the same patterns and details when slanted downward onto desert landscapes. Strom’s photographs capture the earth from exhilarating heights and angles, encouraging our eye to see pattern and detail in even the remotest locations.

Most of the works are sweeping but straightforward overhead shots of vast, unpeopled landscapes. The understated range of colors in the photos is wonderfully enhanced by the crystalline light that Strom achieves. There is also very little emphasis on dramatic shadows and contrast. Instead, textures and colors are offered all at once. Like so many of his works that feature Southwestern scenes, "Mudhills + Desert Floor I" conveys the beauty of remote environments with spellbinding lucidity. From above, we see a pacific countryside of rolling hills of peach and tan, a landscape whose softly sloping crests and crevices are inviting and familiar. "Hillside, Sunset" is a very different kind of mesa scene. The sloping earth is vibrant with rich red and orange dirt, and is dotted with puffy white-tipped plants and yellow sage; the composition glows with crisp light. This uncanny clarity is a unifying feature in Strom’s photographs, and it gives the images a lastingly meditative quality.

Strom has explained that as an astronomer, he spends hours in isolated locations looking upwards into the sky. In doing so he has many chances to look downwards as well. This extreme vigilance is reflected in the variation of textures and colors in works like "Overlook, Fall Foliage," a birds-eye view of a forest of yellow trees. The leaves and branches merge into a swaying, wispy mass of brilliant marigold, and the dizzying overhead perspective makes the scene exhilarating and unpredictable.

A series called “Earth and Mars” is especially compelling. The series consists of images of Martian and earthly environments, forging a fascinating juxtaposition of rolling hills and barren craters that exist on each of the otherwise radically different planets: a shot of dried mud from Utah’s Dirty Devil River is intriguingly similar to a view of undulating Martian dunes. In exploring the otherworldly forms of another planet’s landscape, Strom utilizes his abilities as an astronomer to create scenes of strange and arresting beauty.

A series of close-up shots highlight Strom’s ability to extract intricate detail. In "Burned Agave Core I" his camera zooms in on the plant’s delicate spires, the gentle ombré colors of which are outrageously beautiful up close. Honeydew green gives way to the lightest mauve, and the plant’s blackened tips appear as though singed with a match.

Strom has said that his best photographs “are those that emerge from surprise ... Having the time and space to be ‘open’ is far more important than being in the ‘right’ place.” Strom’s work captures both the eerie isolation and the sheer vastness of isolated landscapes, conveying an attitude of contagious reverie and stewardship for the earth.