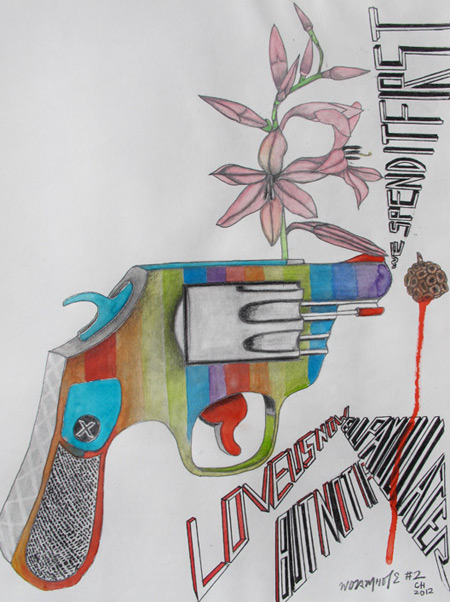 This is not your parent's Pepperland. Sure, there are handguns that bear more than a passing resemblance to one of the Blue Meanies' henchmen, most of them sprouting plants and rainbows. But the plants are exotic, often drawn in suggestive growth patterns and occasionally with thorns. The rainbow colors are stark rather than luminous. And then there's the block lettering; "All You Need Is Love" is not the messaging. Christina Hale puts out the vibe of a disillusioned flower child slowly coming to grips with harsh reality through the only language she really understands. Abuse hums through these small drawings, but you still want to cozy up to them. They reek of tough love.

The wrestling match between the intentional or random violence of the handgun and flora that may well strangle its mechanism is dramatic in "Prayer" and "Masticulate." The latter image is especially effective, the phallic plant appearing to grow out of the weapon's metaphorical nether regions. Each of its many flowers bears a souvenir of the guns innards, a rare but ominous hint that perhaps there is a relationship here that is buried deep in the DNA. The title means to bite or grind, though masticate is the common usage. Emasculation is as implicit in the title as it is to the image.

That razor's edge of division between the manufactured and the organic is hardly the only dominant chord struck in this work. "Chattle" (chattel misspelled) deconstructs a handgun around which floats colorful poker chips, each bearing one of the playing card suit symbols. Put together the notion of bondage and that of random chance and what have you got? A dismantled magnum of course. A deeper elaboration takes place in "Old Grey Wolves," and the rough hand-written text epitomizes the ambivalence that Hale worries like a loose tooth: "Old Grey wolves Laying in wait … Shepard me through the Starting Gates." Not to make too much of the misspelling of "shepherd" in favor of America's first astronaut's name, the unedited quality of word usage feeds the impression that the images flow out of the artist's psyche more with urgency than reflection.

Like an automatic weapon, the loosely displayed words and symbols are too rapid fire to be clear or specific. They dash up to the edge of visual prettiness only to crash against the glassy shards of emotional wounds. "The Stallion the King Can't Ride Ends Up Dead" is the block letter headline of "Murder." The image, featuring the familiar Smith & Wesson, a book of matches, and a Mexican bus ticket, adds up to something cheap and combustible. Paired with the idea that power brooks no rival it's an image as ready to go up in flames as L.A. was after the Rodney King verdict.

All is not guns and flowers and headlines either. Rather mechanistic female figures unzip from chest to navel spilling out slices of fruit in "Raw Data," a horrifying vision of fertility. Bottles of ale and tequila feel like they contain the eve of destruction. Off the shelf packages of diapers and booze get juxtaposed in "Freedom of Choice" - complete with price comparison - comprising a sharp statement on moral values that insists on feeling playful. Right there, that's what is compelling about Hale's unpretentious visual compulsions. First they slap a grin on your face, especially from afar and at a glance. Start reading them up close and it's one punch to the gut after another. But if you hang around for a while, settle in, the tone shifts again back in the other direction. You may not quite break out in laughter, but you start to get the joke. You may never re-board the Yellow Submarine, but you'll be glad you took that ride.