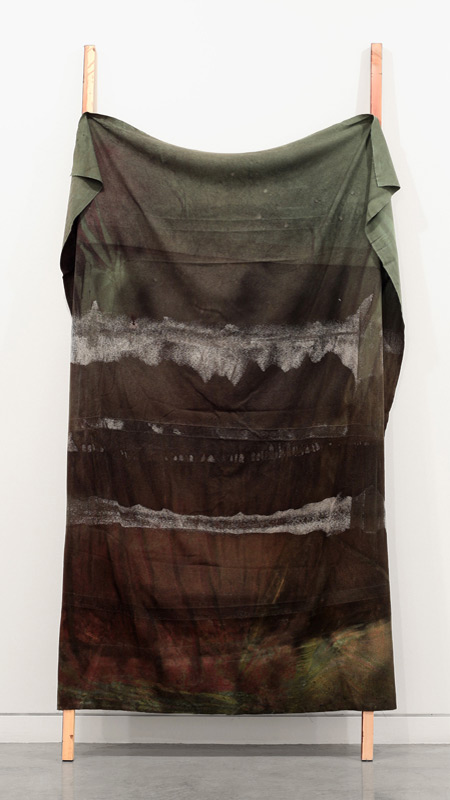 San Francisco artist and 2012 Society for the Encouragement of Contemporary Art (SECA) finalist Liam Everett presents abstract paintings and large textile-based sculpture that have a decidedly staged presence. Opening the exhibition are five large wall-leaning pieces: wide ladder-like wooden structures with cloth draped over them, including a couple of round and straight objects hanging behind sheer fabric. The works suggest a theater backdrop or curtain — the covered objects become stand-ins, perhaps, for characters or props — and are, because of the fluidity of the fabric, suggestive of dancing or other movement. Equally notable and hung across from the sculptures are paintings that are as much about what’s there as what’s apparently been removed. Think of Rauschenberg’s "Erased de Kooning Drawing." These mostly white black-on-white paintings look as if the artist has removed pigment, leaving us with remnants that are replete with the lines and gestures, of the erasing action.

The show is rounded out in the smaller second room with a group of wall sculptures — large triangles covered in fabric — and a large piece comprised of two sawhorses on which are set a pair of long dowel-like lengths of wood. Over these slats is draped a large piece of cloth. Through this body of work Everett conveys a sense of his unfolding creative process mixed with the suggestion of theatricality. The works are as much about about the space they provide for impending creative activity to take place as they are about the objects as they are presented.