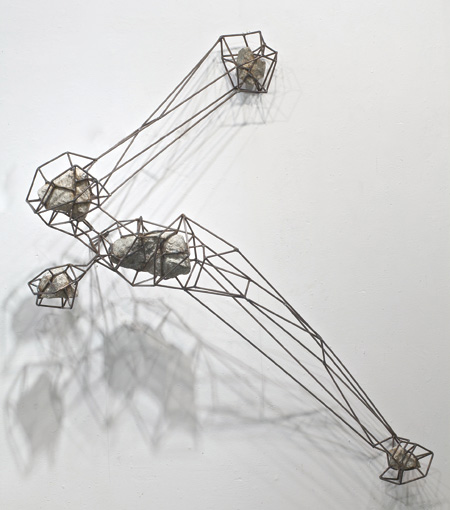 Global climate-change disasters like Superstorm Sandy and Hurricane Katrina concentrate our scattered minds wonderfully (or rather, depressingly) from time to time, to the reality that we live inside and are part of nature. We indulge in an illusion of total control at the promptings of the nuclear industry, utility companies and Wall Street. Mark Baugh-Sasaki is a young artist who has made environmentalism, one of the  unofficial religions of northern California, an integral part of his striking multi-media work. It might be encapsulated as sociopolitics without tears (or lectures): it’s compelling art that raises Big Questions. In "The Civilized Wild," he examines — through photographs, abstract drawings made with unorthodox materials, wall- and floor-mounted steel and rock sculptures, and installations utilizing digital projections — the path that water takes on its descent from the mountains to the sea, from Mt. Dana and Mt. Lyell, down the Tuolumne River, through the Central Valley, to San Francisco Bay and the Pacific, traversing aqueducts and pumping stations.

The works are decidedly contemporary, however, with no hint of the heroic Depression mural. Five color photo diptychs juxtapose visually complementary views of our hydrological infrastructure; five "Strange Attractor" sculptures envelope granite rocks in polygonal steel skeletons. articulated-looking frameworks that appear to belong in orbit; two installations employ running water and computer-controlled video to evoke stream beds and 49er gold-miner’s flumes; and, in the only retro touch, a pair of untitled horizontal-format drawings, made with smoking (not burning) acetylene torches, recalls experimental abstractions of the 1940s using smoke to conjoin astronomy and atomic physics.