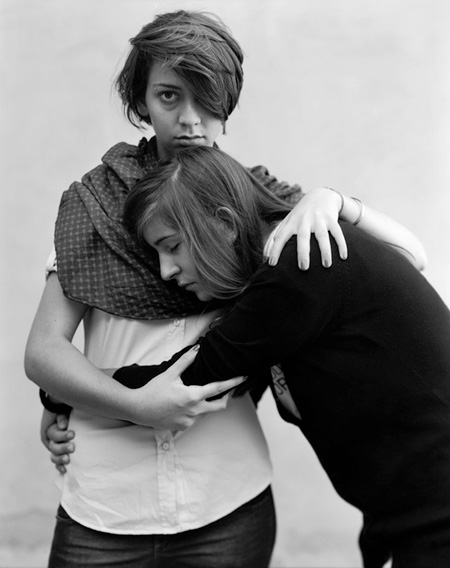 The narrative photographs of Andrea Modica are arresting reminders of the ties that bind us. Titled “Best Friends,” the series of black-and-white images, each depicting two teenagers standing together, engage in a dialogue about the nature of youthful intimacy. In one, a young adult stares into the camera and strikes a fiercely protective pose while cradling the shoulders of her friend. In another image, two unsmiling girls put more distance between them than necessary as one directs her eyes away from the scene. Many of the subjects intentionally use clothing and hairstyles for self-expression, as in the young man confident in his choice of mohawk hairdo and leather jacket bearing the words “Anti-Social.”

Each image conveys its own story, with the artist's formal emphasis on tonal range and her expressive attention favoring soul-baring poses. But these are ordinary teenagers (mostly from a town in Italy where Modica was an artist-in-residence). Modica shoots with a large-format 8x10 camera and uses the historic process of platinum/palladium printing. She hand-coats the paper and occasionally allows the black brush strokes from the coating process remain on the perimeter of the print. To photographically create a tableaux of angst, confusion, camaraderie, young love and loyalty, Modica could have chosen no better subjects than children in transition to adulthood.