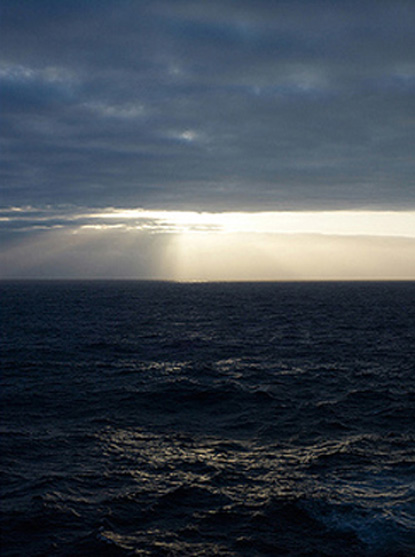 Catherine Opie has long been fascinated by the natural as well as the man made environment. While she is best known for her self portraits and photographs of the gay community, images of her physical surroundings have always been an integral part of her practice. She has described her work as being "always about my surroundings and the way I wander the world." She photographed planned communities in Valencia, CA (1989) as part of her graduate thesis project, documenting the changes these developments imposed on the landscape. Her interest in the environmental impact of construction prompted her to photograph the 105 freeway curing construction before any cars were on it (1994), making platinum prints that used the richness of the printed surface to accentuate in the formal beauty of the architecture. She created saturated color photographs of homes in Bel Air and Beverly Hills (1995), and followed that with a series of photographs of Los Angeles mini malls (1997). Cities other than Los Angeles have interested Opie. She did projects in St Louis (1999-2000) as well as Chicago (2004), and her first series of vertical images made with an 8 x 10 view camera were pictures of ice houses located in Northern Minnesota (2001). In these images the seemingly tiny structures spilt the compositions so that equal amount of white - sky and ice - appear above and below the buildings. Her images of surfers (2003) are compositionally similar. In these photographs the ocean is dotted with surfers who drift between water and sky.

In the summer of 2009, Opie received a commission from Hanjin Shipping to create a work based on a journey on one of their ships. Opie boarded a container ship traveling from the Port of Busan, Korea to the Port of Long Beach. On the ship she photographed the sunrise and sunset each day for ten days and created the dramatically beautiful and painterly body of work entitled "Twelve Miles to the Horizon." The title refers to the twelve mile distance between the artist and the horizon but more importantly evokes the notion of time, empty space and solitude. The twenty images on view here focus our aesthetic attention on the point where sky and water meet. In some the sun appears as an orange dot rising or disappearing into the distant horizon, in others it is not visible at all, rather the composition shifts from light to dark as in a color field painting. "The biggest cliché in photography is sunrise and sunset," remarks Opie, "I wanted to play with that but also make something that was time-based. I like that time is marked by each sunrise and sunset whether or not you actually see it." While Opie's images do make reference to to Hiroshi Sugimoto's "Seascapes," his images are black and white and long exposures. Hers are in color and instantaneous. Both artists take advantage of splitting the vertical frame but Opie is concerned in the qualities of light and color that emanate from the horizon. She states, "I’m very interested in the language of photography in relationship to painting."

As no sunrise or sunset is identical her images call attention to differences. Clouds appear, as do crashing waves as well as portions of the ship and its cargo. The series begins with an image of the port in Busan. It is a straight documentary image depicting the cranes and the containers that interrupt the landscape that are a jarring contrast to the blues in the sky and ocean. The series progresses through ten sunrises and sunsets. Taken within seconds of each other on successive days, the differences are dramatic. "Sunrise #1" records a yellow ball rising from a choppy sea, a few clouds hovering at the horizon. "Sunrise #3" is a field of blue with no discernible landmarks. The harsh contrast between sky and ocean is clearest in Sunset #8. It could be the background in a J.M.W. Turner painting. The works describe subtle changes, and for the most part are emptied of everything but nature. Perhaps because she was journeying on the open sea where there was nothing but shades of blue and undulating waves to see, Opie could allow the vastness of the ocean experienced by slowness of this mode of transportation to radiate from the work. The images reflect a calm.

When the sun sets, light disappears, when it rises, the world comes alive. Opie set out to capture an exact moment, before the change from day to night or from night to day. In between there is darkness. While sunsets and sunrises are clichés they are also poetic and it is the poetics of the light, the sea and the space that fascinated Opie. Seen together the works not only reflect a journey from place to place but become a panorama of that experience. The series ends with an image of the port of Long Beach bringing the industrialized world back into the image. While questions about what was being transported, the economic relationship between Korea and the U.S., the role of the ship's crew could have been addressed, Opie chose to focus on what she saw outside rather than on the ship. However, in addition to making the sunrise and sunset images, however, Opie also kept notes and journals and made candid photographs of the crew. A selection of her notes and candid photographs will be on view for the first time here as well, though these were not available at press time, so expect to see an expansion of the scope of the project when the show opens.