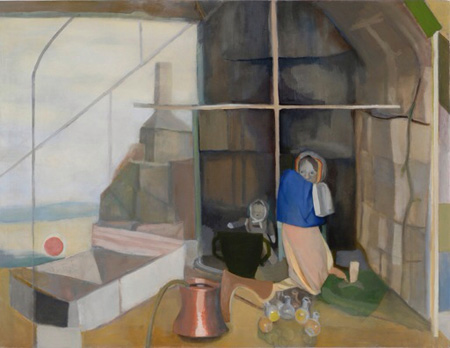 The increasing convergence of art with fashion, entertainment, technology and instant gratification may now well be unstoppable, but the exceptions to that rule, serious painters like Frances Lerner, suggest that art history may yet survive the general slide into cultural amnesia. The small oil paintings on panel that made such a strong impression in the 2010 "New Images of Man and Woman" group show (at Berkeley’s Alphonse Berber Gallery) are back in force in this beautifully installed solo show, "Minor Characters and Sympathetic Criminals," featuring around two dozen eccentric works that are full of feeling.

Employing the same puppets — acquired at flea markets — as before, Lerner (who is also a social worker and illustrator) creates enigmatic narratives that recall satirical novels about victims of social turmoil, namely refugees, not exactly a dead issue these days. One thinks of Hasek’s "Good Soldier Schweik" and Gunter Grass’ "The Tin Drum" as literary analogues, and of Callot’s "The Miseries of War" as a visual ancestor or precedent. Lerner’s Old Master technique, grisaille underpainting glazed with color, results in a subdued palette of beiges, grays and greens, with brighter color accents, reminiscent of the British visionary, Stanley Spencer. But her rendering of the doll-like figures in their ramshackle environments is soft edged, almost plush. Lerner infuses her bravura painting with a rich blend of innocence, menace and enchantment.