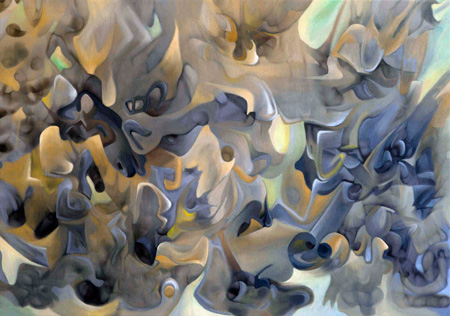 Fumage was among the arsenal of techniques used in classic Surrealism to help get the juices of the sub-conscious mind going. The random imprint of smoke from a combustible object such as a candle would be applied to a painting surface so the artist could let their imagination roam. Like Jean Arp's dropped strings, Max Ernst's frottage, or the automatism of André Masson, fumage offers a random but distinct starting point. Historically these techniques are firmly rooted in Dada and Surrealism; aesthetically they enabled artists to focus on the process of the interplay between painting and imagination free from the pre-planned image. As earlier formal innovations gave artists permission to bring painting back to the two-dimensional surface, these innovations represented the decisive overturning of a pictorial hierarchy that the Impressionists and Symbolists had only begun.

A century later the notion of more versus less important subjects in art is a long settled issue, and the process liberating technique of fumage is one among a vast arsenal of devices artists draw on without controversy or surprise. That the Los Angeles based Antonio Muñiz is a native of Mexico and makes extensive use of fumage plays to the general fact that the surrealist aesthetic has remained a more vital force in Latin American practice than in the United States. My own belief is that the romance of painting retains a more fixed attraction in cultures and for individuals where the volume of mass marketing and celebrity are reduced a notch or two below the blare and the glare that Americans are born to. There is also a tradition of greater rigidity in matters of social mores, class and economic opportunity that has gradually tilted towards a more progressive model only in recent decades.

I take the painting of expatriate Muñiz to be rooted in these broad forces. He embraces the early rebellions of Wolfgang Paalen and Roberto Matta as his direct aesthetic inspiration, and the lyricism at the core of these masters is fully apparent in the paintings we encounter here. If his use of smoke to stimulate visual inspiration pays homage to Paalen, Muñiz' natural tendency to spread the formal action all around a canvas is akin to Matta. Compositions are difficult to pin down, but that is the starting point not a shortfall. This body of work wrestles extensively with writhing, attenuated sculptural forms emerging out of a unifying soup of space and color. The complexity goes beyond Muñiz' spiritual antecedents seemingly as a direct product of the explicitness and scale of scientific models of the cosmos and biological development. His intuitive metaphors are based on far greater empirical certainty.

"Walking to Paradise" is essentially an explosion that gives birth of a variety of forms that range from primitive cellular and wormlike creatures to strong hints of fully evolved humanity. Its yellow fireball sits like the crown of a tree on a slender but visually stable trunk. The sense of accelerated motion is cinematic; it wouldn't come as a surprise if related sculptural elements were splattered around the gallery space. But Muñitz is clearly not obsessed with pushing his imagery out into our space; most of the work here is more of a thicket, functioning to draw us into his mental space. The theory, I'd say, is to appeal to our sense of fascination. The more we explore the intricate visual spaces of, say, "The Great Escape" or "The Creator and Protector of Hearts" the more we occupy them. He wants to trap us into making these spaces into our own narrative, a noble trick.

The breaking-up of his compositions into innumerable details walks a pretty tight line between allowing the eye plenty of options to explore versus simply wearing us out. He wants to paddle us out into the waves in order to get us to ride them back in on our own, but "Notorious Apple I," which makes me feel like I'm parachuting down into a completely crazy-quilt topography, is an example of towing us out too far. With so many ingredients Muñiz has to figure out how to regain the integrity of the image rather than defer responsibility for what it wants to be on the innocent viewer. The singularly sculptural form of "Astros and the Actual Time" therefore comes as a relief. That it reads as both contraption and critter strikes a humorous note that cleanses the palette before diving back to the more serious business of world building.