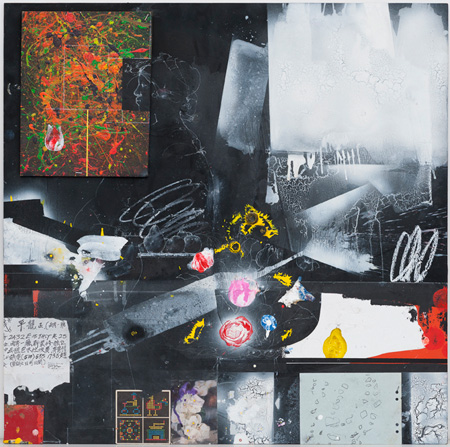 The spirited energy Raymond Saunders infused into a 2001 collaged work appropriately titled “Jam’in” persists in its affinity with the jazzy blend of dialog between the dozen or more mixed media works on panels in Saunders’ latest series, “ ... not wanting a title.” In this captivating exhibition, vibrant polyrhythmic improvisations and collaged syncopations gradually give way to invigorating painted solo passages worthy of our applause.

Included in the mix are found materials ranging in size from the recycled household doors Saunders intermittently uses as supports, to bits of applied collage composed from sources including faded Ebony magazine covers, art post card reproductions, Oakland business brochures, and pages snatched from cast-off children’s books. The materials collected by Saunders reach up and down the scale from notes of joyous exhilaration to minor chords suggesting hard use and personal struggle. Kid’s drawings, tulips, lilies and hearts co-exist with newspaper photos of Malcom X and line drawings of bees, skulls and safety pins. Like jazz soloists who acknowledge their heroes with new renditions of melodies made famous by the musicians they admire, Saunders shows his respect for artists including Andy Warhol, Jean-Michel Basquiat, and Robert Rauschenberg in his own mode.

“Good fortune” is spelled out in Chinese Kanji characters in a work on repurposed wood paneling in which the painted stripes illuminating the upper right hand corner recall imagery utilized by Rauschenberg in “Small Rebus” (currently on view in the Getty Villa exhibition, “The Last Days of Pompeii”).  Rauschenberg’s rule in 1950’s New York was, "If I walked completely around the block and didn't find enough to work with, I could take one other block and walk around it in any direction — but that was it.” Saunders’ commitment to serendipity is more inclusive. While maintaining studios in Oakland, Venice and Paris, he roams the world, compulsively picking up the urban detritus that invigorates his imagery.

The lacy paper doilies applied to or used as stencils on several of Saunders’ works allude to memories of the artist’s mother and his home in Pittsburg. It was there that Saunders’ talent for art was first recognized. He attended Saturday art programs sponsored by the Pittsburgh Public School system, allowing him to explore the Carnegie Museum of Natural History, view the annual Carnegie International which exposed him to hundreds of contemporary works from all over the world, and hang out in the library where he could rummage through stacks of art books or hear recorded music. Since earning his MFA at the California College of Arts and Crafts, Saunders has had a long and distinguished career teaching at that institution.

Although each of Saunders’ expressive, multi-media assemblages can easily stand on its own, his replay of favored imagery, including numerous variations on the stenciled vase he turns three dimensional with sprays of highlight, contribute to an engrossing, enigmatic narrative flowing from one untitled work to the next, continually inviting ambiguity. While he has previously hinted at meanings through titles, occasionally naming works after shows are hung, the images in this series remained free of titles at press time.

The curved, enigmatic vase that appears so frequently in this series can be read as a maternal symbol or receptacle for the spirit or ashes of the dead. One 24” by 24” work on a textured black ground includes a ghostly female profile and duo of stacked vases outlined in white prismacolor, withdrawn behind bright dabbles of flowers and signature-like scribbles. Historically, ceremonial urns containing consecrated elements such as oils, wine, etc. were intrinsic features in religious rituals of divination. Conversely, since vases may also contain living elements such as flowers, associations with nature's bounty are feasible. That interpretation more closely coincides with the inclusion of the very striking painted fruit and flower arrangements that energize works hung near the gallery’s office. Solid color backgrounds of dramatic black, stark  white, or blaring red, none smaller than 48” by 20,” set off expressionistic passages of flowing paint. In one spectacular asymmetric work, brassy splashes of yellow ochre and vibrant purple sing out over entwined scribbles and exquisite line drawings that mystify sensations of space and depth. Songbirds, perched on a sheet of metal affixed to a work nearby seem to await their cue: ready to sing praises to the whole intriguing chorus of work Saunders has assembled.