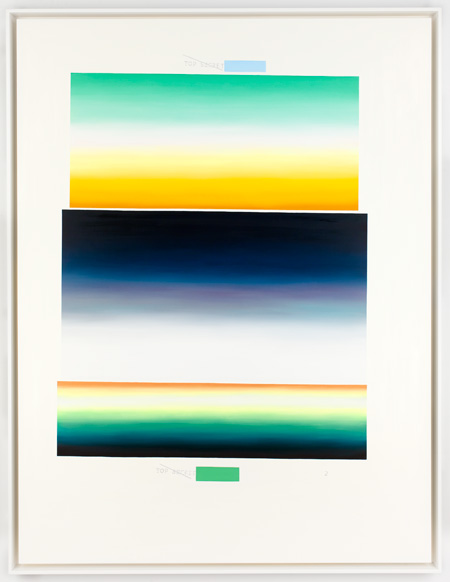 Holzer’s work also enlists that most commonplace fact of life today — the elasticity of meaning, a wondrous elasticity that permits representations in words and images to eroticize something banal as deodorant, and deodorize the most fetid abuses of privilege and profit:  “Corporations are people …”  - Mit Romney

The delivery of economic, sexual, political, religious, national, ideologies via mass digital platforms hit home 30 years ago when Holzer’s “Truisms” deployed then innovative electrical signage on Wall Street and in sacrosanct cultural spaces like the Guggenheim Museum. “Protect me from what I want” – at once benign, pleading, obsessive - projected in ad format on the streets of the most lucrative global market, invited tens of thousands to ponder the very nature of human desire and its commercial stand-ins.

In 2012, we have taken both Holzer’s messages and means so for granted that one asks whether a creative practice still investigating these ideas is viable. A current show of classics from the 1980s, plus works from the last decade or so answer with a resounding yes.

Included are rarer and in some cases more interesting '80s pieces that may surprise viewers less familiar with the fact that Holzer smartly inscribed loaded snippets onto an assortment of non-electric, non-publicly sited surfaces: canvas, bronze, marble. Holzer matches text to material brilliantly, each medium freighting its own subtext (there is something just plain believable about marble), either abetting or problematizing what we read in the most interesting ways.

On view is "It's an extraordinary feeling …" from 1981. In this unctuous bit of text, pulled out of context so we do not know the precise referent, we read about something that is clearly not sexual – violence, power (neither are ever stated) – intoned in an almost salacious, orgasmic whisper by an anonymous author. Etched in bronze, compact, sculptural and oddly authoritative in ways LCD lights cannot be, the meaning here is more nuanced than the Pop oriented critiques on capitalism we expect from textbook Holzer. Here she questions ways high culture, not just crass consumption participate in producing our written and unwritten social texts on what is ordered, what is real, what is correct.

Since 2004 Holzer has been using not found snippets but actual known texts drawn from declassified United States government documents such as memos, sworn statements, emails, directives, judgments, materials from the National Security Archive and the American Civil Liberties Union. Though supposedly made available via the Freedom of Information Act, huge, key sections are redacted at will in the typical black marker of the censor. Holzer inscribes these government texts onto the familiar large scale light projects and signs, but more interestingly onto paintings that, again, connect her inquiries into power and meaning more closely to art, to notions of beauty/pleasure and to art’s history.

Included in this exhibition are samples from her "Redaction Paintings," where portions of these sorts of government texts are reproduced and the precise black rectangle patterns of redactions are replaced with painted arrangements of color pre-selected by Holzer. There’s a clear reference here to the Suprematist works of Malevich, which viewed pure abstraction and pure color as a system able to represent/harken forth some egalitarian, ideal, non-nationalistic meta-Order. The works are not just historically intriguing –we search the passages for events/decisions that have shaped us — they are visually lovely and conceptually rich.

Holzer poses and answers her own visual argument several times here: She nods to Malevich’s and her own deep belief in art’s role in envisioning a social utopia, then also suggests with her colored schema that all systems, however ideal in intent, mask an inevitable hierarchy of decisions. Someone decides something to move ahead with – in art, in government, in daily life.  Holzer takes the inquiry a step further since these official, once secret texts never let us forget that the collective deciders are usually the intellectual and economic elite. By allowing the loaded, real passages to peer through her painted marks in some areas, to be occluded by her color in others, Holzer ends an elegant syllogism with a final reminder that the artist’s mark/voice/text may indeed be the last perimeter of considered choice.