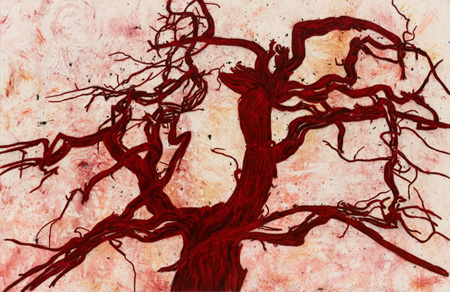 Although London-based painter Tony Bevan’s work may be seen is and contextualized alongside his more senior fellow-compatriots in fleshy portraiture - Leon Kossof, Frank Auerbach, and of course the late Lucien Freud – it has distinguished itself with a characteristic one wouldn’t particularly associate with visceral figuration: a predominant use of line. Counterintuitively to this genre of portraiture, Bevan’s figures and interiors simultaneously deploy both visceral and graphic sensibilities going back more than 20 years.

His last solo exhibition here was in 2007, though just last fall (2011) a painting from his “Self-Portrait after Messerschmidt” series was included in the group show, “Loose Canon.” Concurrently, Bevan has another self-portrait from that series included among the contemporary responses to the 18th-century Austrian sculptor Franz Xaver Messerschmidt – whose portrait heads to this day still seem to mark an apotheosis of a kind of facially expressive intensity – in the “Messerschmidt and Modernity” show at the Getty.

Messerschmidt's grip on Bevan goes back to the latter's days at Goldsmiths College, where he dedicated his undergraduate dissertation to the artist. The "after-Messerschmidt" works, meditations on severe face-and-neck muscle clenching, in concert with folds of aging skin, are quintessential Bevan. This we see in a committed arrangement of ultra-hefty lines in acrylic mixed with pigment and/or charcoal, that manage to replicate fleshiness, as well as the taut surfaces of tendons, without gobbing on the paint. Whereas Messerschmidt's heads embody an undeniable aggression, in Bevan's hands the same subject takes on a cool remove, even as they retain elements of classical draftsmanship.

In the latest works on view here, the tension built into confidently commanding lines summons both architecture and Maori facial tattoos. Though it's arguably an expressive structure, they stand as formal investigations far more than psychological ones.  Perhaps this is some sort of contemporary ideal - any expressionist clichés are boiled away into a formal construct. After all, isn't it the universality of Bevan's self-portraiture, as opposed to the individuality, that makes the work appealing?

Bevan’s current crop of self-portraits, executed in his long-established limited palette of blue, black, red, orange and off-white – and their fleshy confluence, by way of smudged pigment across canvas or paper – are disembodied heads that float like balloons of stone, alternately on flecked or solid grounds. They bring to mind, literally, illustrated men, with lines mapping skulls like so many tributaries across a topography. In addition to the latest iteration of self-portraits and a couple of interior architectural pieces, half of the show is given over to a new wrinkle in the work, in the form of moving away from both himself and the studio. Instead he focuses on a lone tree, one that Bevan encountered outside a temple in Sichuan Province, China during his travels there in 2007-08.

The best of these tree studies bring to mind the way in which Van Gogh depicted them, with a certain cosmic quality. Whereas Van Gogh used densely painted skies, Bevan's are animated by expressively smeared and gritty backgrounds. Not surprisingly, though, while Bevan is more committed and thorough in his depictions – exploring the branches' bare wintry ferociousness, a seemingly ever-expanding mottle of gnarled protuberances – any emotional resonance is quiet to absent. And again, perhaps this is a virtue; it's a case of the best personal expression being contained within its formal vehicle, which for Bevan is the self, the studio, and now the tree.

Back in the 1980s and early '90s, Bevan's figuration read as especially graphics-oriented, and bore some similarities to the work of the New York artist Ida Applebroog. As opposed to Applebroog, Bevan's figurative oeuvre has taken a course in which form has, for the most part, essentially trumped content.