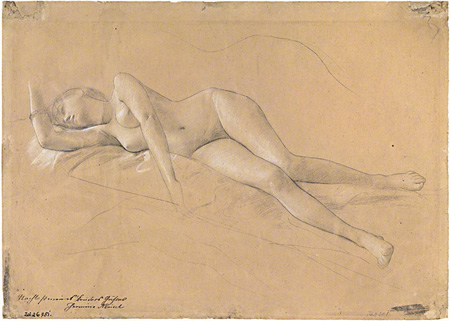 If you thought of Gustav Klimt only as a nice, decorative artist with a penchant for portraits of pretty society ladies, this exhibition will make you think again. “Gustav Klimt: The Magic of Line” starts by displaying what a superb draftsman he was, starting in the first room of studies for a ceiling mural for the Burgtheater in Vienna, opened in 1888. The mural depicts the death scene of "Romeo and Juliet" – she prone on a slab, he slumped by her side, both in the bloom of youth. On the right half of the mural is an Elizabethan audience, witnessing the tragedy in hushed attention. The studies show how sensitively Klimt drew his posed sitters. Using black chalk with white highlights he captured not only flesh and bones, but also attitude and spirit. This early academic-style work may be unfamiliar to most of us, but it clearly lay the groundwork for his later breakthrough.

A founder of the Viennese Secession movement, Klimt became increasingly interested in depicting psychological and spiritual states of being.  He began to actively use negative space as part of his compositions, and to integrate the modules of pattern and the gold leaf for which we know him. The “Beethoven Frieze” (1901-2), a triptych recreated full-size through photography in one gallery, ambitiously tries to capture the life cycle. It begins with the longing of flying spirits and ends with two standing lovers embracing in a capsule of decorated gold. In between, on the middle panel, are the various “Hostile Forces” which hold us back, things such as “Lasciviousness, Lust and Excess” – all three embodied by women, of course. (In this respect, he was typical of his time.) Many preparatory drawings are included. There’s something very modern, forceful and sensual in his women – the beginning of modern glamour, it seems to me – and these qualities are carried over to his later society portraits such as the now familiar ones of Adele Bloch-Bauer