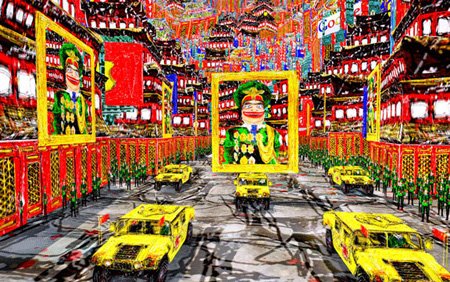 Federico Solmi, ''Chinese Democracy and the Last Day on Earth,'' 2012.

When this exhibit opens, in addition to related paintings, visitors will see the world premiere of Federico Solmi's inimitable film, "Chinese Democracy and the Last Day on Earth." Two years in the making and still incomplete at our deadline time, this audacious centerpiece was commissioned and partially funded by the John Simon Guggenheim Foundation.

People familiar with Solmi's work know him as an Italian artist/provocateur who has lived in New York since 1999. Nothing is sacred from his biting satire. With wild abandon, he fearlessly attacks government, politics, corrupt corporations and religion - even the Pope is fair game. Solmi stirred up a hornet's nest in 2010 when "Douche Bag City" (his controversial film about Wall Street) was presented at the SITE Santa Fe Biennial.

Now comes a 10-minute film that continues his dire assessment of our post-secular, post-modern, egomaniacal, materialistic world. Through production techniques that combine hand-drawn animation with digital models and computer-game engines, Solmi creates a high-voltage style of video with exceedingly intense color. The end result will be a three-dimensional film with large-scale drawings that appear to be hand-made. Created in collaboration with Australian artist Russell Lowe, the imagery made my blood curdle. Solmi equates the decline of the human race with mankind's thirst for power, wanton greed, and arrogant hypocritical dictators. He divides his film into three parts, which he presents in grotesque, comedic form.

Part 1, titled "Song of Tyranny," is a portrayal of a fictitious Chinese authoritarian leader who is driven by ruthless ambition and idolized by his adoring subjects. With America as his final obstacle to world domination, he is laying the foundation for one convulsive battle. Part 2 is the tragic result that occurs when this egocentric leader becomes a dictator and enslaves his subjects. Part 3 is "The Invasion of Times Square," the war between the two superpowers and the end of the world as we know it.

Visitors to the gallery may laugh and recoil simultaneously at the sight of Solmi's maniacal leader and his delusions of grandeur. There he is, a diminutive Chinese general with a ghoulish clown face, garish green uniform, and a chest weighted down with gold braid. Standing high above the square, smirking at martinets who march in lockstep through some central plaza, he is depicted as a menace who is threatening the world. With neon intense colors (red, green, and yellow dominate each scene), everything is electrifying.

Solmi's sense of dimension can be huge.  Segments of the film illustrate over-sized, indestructible tanks parading through balloon-festooned squares from various points of view: driving into town, entering the arena where masses of people await them, looking down on the mob from dirigibles - even inside the cab where a crazed driver sits ready for death and destruction. Signs reading "IKEA" and "Best Buy" refer to American corporations that outsource their products to China.

"Plus ca change, plus c'est la meme chose" and "Those who don't learn from history are destined to repeat it." The message is loud and clear; but this time, (according to Solmi), the world has been pushed to the brink. "Chinese Democracy and the Last Day on Earth" acts as a cautionary tale for anyone who reads his subtext.