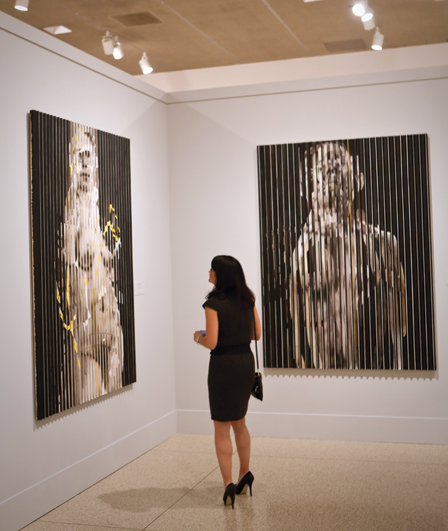 In ancient Greek, the root of the word 'dynamic' carried two meanings. On the one hand, it described power or strength, on the other, potential or possibility. The paintings in Mexico City-based Roberto Cortazar's intimate solo exhibition at the San Diego Museum of Art embrace this doubled etymology of the show's title, each work seeming to stop the power of representation in its tracks at the threshold of its own realization. The paintings in "Dynamic"--all of which were made since 2011--are billed as taking their cue from The Hands of Dr. Moore, an idiosyncratic work by Diego Rivera that is housed in SDMA's permanent collection and which is presented at the exhibition's entrance. The Rivera painting forgoes a portrayal of the face of Dr. Clarence Moore, a Los Angeles surgeon who went to Mexico to sit for his portrait in 1940. Instead Rivera focuses on the doctor's hands, portraying them in a mythical act of surgery in which a tree is incised by scalpel out from the chest of a female patient. The first painting by Cortazar in "Dynamic," a red canvas of the same dimensions as Rivera's painting, that anthropomorphizes the original tree, is the only work on view that appeals explicitly to the Rivera picture. Departing in scale, style, and aesthetic priority, the other ten or so paintings in the show present a sense of corporeal dismemberment (by scalpel?) and an obscuration of the face that, while both thematic to Rivera's small painting, are treated in a dramatically new light.

The majority of the paintings in "Dynamic" seem, in fact, to have little affinity with Rivera's painting. Ostensibly figurative, these are larger scale, less colorful works that appeal to a logic of optical illusion, many even with fractured pieces of wood panel organized accordion style across the surface with intimations of figures painted on either side. This format, familiar to illusionistic displays, creates the expectation of a revelation of different figures from different sides. However, a viewer walks back and forth attempting to assemble the disparate and distorted pieces of a body or a face to no avail; at all moments these parts refuse to come together in a unified whole. The result is a disorienting complication of the various logics of compression and expansion, or fragmentation and gestalt, that keeps Cortazar's powerful yet spliced representations suspended in a compelling state of perpetual potentiality.