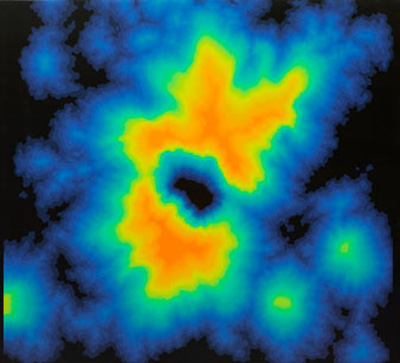 To describe Jack Goldstein as man of contradiction is an understatement. On the one hand, an erstwhile "salon painter" who painted to sell, he also purposely avoided revealing "authorship" of paintings to the point where he hired others to execute them according to his instructions. All the while he eschewed any sort of identifying marks such as brush strokes.

Then again, he put himself into the spotlight as a performance artist and produced video loops that repeated an action such as a dog barking ("Shane") over and over, something that originated with his concept of vision and sound vying for space in memory. He rented sound equipment to record sounds distantly related to conventional music and cut his own vinyl records He designed their covers in the minimalist vein he had come to admire, influenced by instructors like John Baldessari.

The artist began his vast and varied body of work as a sculptor, placing pieces of wood in ways that suggested the vulnerability and impermanence of objects in the wider scheme of life. It is, however, understood that in his own life he sought endorsement among fellow artists (a form of permanence) and, disappointed at its absence, abandoned the medium after a time.

Goldstein came "of age" after graduating from CalArts, a school with its ideology and curriculum defined by instructors like Baldessari and fellow students such as David Salle and Matt Mullican. An older contemporary of Barbara Krueger and Richard Longo he, along with such peers, became acutely aware of the power of mass imagery, of pictures as shown in the media of that time.

Think of the MGM lion, which Goldstein clipped from its surroundings. He placed it against a blood-red background while it roared in an endless loop, evoking the anticipation of seeing a new flick until realization sets in that nothing else is ever going to happen.

In an odd sense, the lion’s endless impotent roar might serve as metaphor for Goldstein’s life. Born in Montreal in 1945, he moved to California where he set his career onto a promising path. He then moved to New York, where he was celebrated by gallerists and collectors, and also found an appreciative audience in Europe. When he returned to California, he sank into obscurity and drug addiction. Sequestered in a San Bernardino trailer, he ultimately took his own life.

He belonged to the first generation that had been exposed to television and lived in a love-hate relationship to Hollywood and the film industry. Well aware of its power, he responded with seemingly endless creative explorations that included re-purposing still photographs by altering details, stripping away backgrounds and by adding text and unique color schemes. He put his own imprint onto work that would belong to no one while speaking to everyone. Throughout Goldstein’s videos and stills runs an undercurrent of power and control on one hand, and a sensation of futility on the other.

One of the most discussed videos is 1975's "A Ballet Shoe," a pictorial allusion to the power of the unseen or resistance to it. The hand that unties the ribbons of the dancer’s toe shoe also stopped her performance, or perhaps she no longer wants to move. It’s up to us to decipher Goldstein’s meaning.