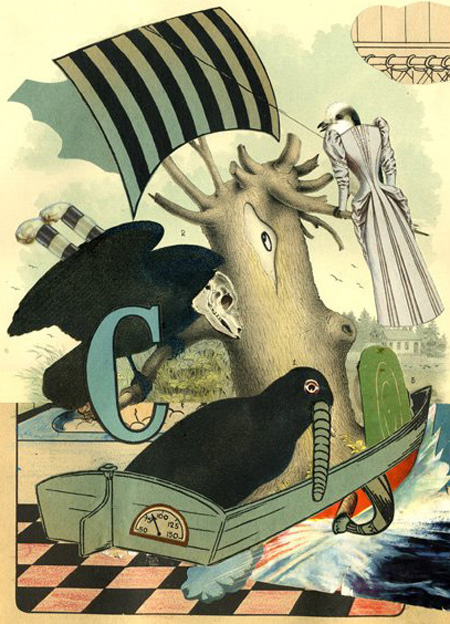 Draped in ivory and dark blue garb in a hue reminiscent of the Virgin Mary, “The Seer” appears seated in the foreground of a forest scene where every form including the surrounding trees, fauna, and vegetation has been cut out. So too does the “The Seer” seem to levitate in midair as his form has been carefully extracted and placed before a plane that pierces the left angle of the composition. Like a canvas mocking its maker, the plane sits before the cloaked “Seer” whose face is completely veiled, only leaving the distinct outline of a pointed and collapsed nose in profile, which appears dumbfounded, intent and intrigued by the outline of the large flower set before him. As if arrested by the image before him, “The Seer” clutches his chest with a pair of unusually large hands rendered in a formal painterly style. They are pronounced not only for their gesture but because the rest of “The Seer’s” anatomy is rendered in a looser, illustrated style complete with a purple Mad Hatter inspired floppy top hat perched on top of his head. “The Seer” is part of an intricate tapestry of Los Angeles based collage artist Lou Beach’s practice, which is greatly informed by the act and surprise of looking. Collecting found materials of all subject matter, Beach plays wickedly inspired games with his audience. Narratives are created from seemingly disjointed sources but, like the flower before “The Seer,” slowly reveal themselves and blossom over the course of looking.

"Stories and Pictures" is a new kind of exhibition for Beach, as it not only features new collage works but also incorporates readings from the artist’s recent book titled “420 Characters.” As a luminary in the world of collage, Beach has created original album art for Weather Report, the Neville Brothers, Blink 182, the Yellow Jackets, the Police, the Carpenters and others. Beach’s practice has also long been tied to the written word. as he crafted works for leading editorial in Time, Wired, the New York Times, LA Magazine and other national and international media outlets. “420 Characters” seems a fitting step for Beach, which began as Facebook status updates that have a maximum of 420 characters.  Experimenting with intricate prose that recalls quirky exchanges of dialogue, noir-inspired description, and playful scenarios, Beach’s intricate prose mimics his collages as self-contained art works. As witness to the development of “420 Characters” Beach’s Facebook followers received frequent status updates. After composing original updates day in and day out, a collection of prose was gradually amassed.

Integral to the collection of works in "Stories and Pictures" are five “Fables,” each rendered in a flattened pastoral landscape that recalls vintage Disney backdrops where rabbits frolic and birds peacefully occupy tree limbs. A collision of time and space occurs in the works as the vintage landscape speaks to a sentimental and formative past; the cut out images infused in the composition constitute a revision of once familiar narratives. In “Fable One” found comic strips of wide-eyed and jovial marching bugs have been cut out in the shape of two figures sitting before their picnic. Using found images to create an outline of an entirely new image creates depth within the collage and is Beach’s way of providing a visual entryway into the inner workings of an image. One figure appears reclined while the other is seated. Their blanket nearly runs off the edge and onto an empty winding road below.  A woodpecker appears in profile with its beak stuck in the dense tree trunk while a squirrel looks on in curiosity. A riff on Manet’s “Le déjeuner sur l’herbe,” the idyllic picnic in a tranquil spot in the woods is interrupted by a bomber plane that maneuvers in between the dense foliage. Its race checkered nose barely tilts up in time to avoid the couple on the picnic blanket and while its presence in the forest remains unknown the plane seems to glide as if were a graceful bird.

In “Fable Three” a barefoot woman stands in a pseudo contrapposto pose in front of a winding river. In profile her face – which has been concealed by a by a wedge of lemon cake with chocolate frosting, a cupcake in a blue doily with whipped white frosting and an extended telescope – assumes the function of her eyes. A pair of legs in tights runs away from the woman and toward us and we see that the upper portion of his body is a white hare. A third figure appears on her hands and knees with the wings of a small airplane extending from her torso supporting two squirrels sporting bandannas over their heads.  The figure has an anvil in place of a head and is reaching out her with a pair of scissors to trim the dotted hem of the standing woman’s skirt.  While the “fable” is ambiguous, the pair of scissors eludes to Beach’s own artistic hand, which is responsible for the beautiful, thoughtful, and intelligently absurd collages present in "Stories and Pictures."