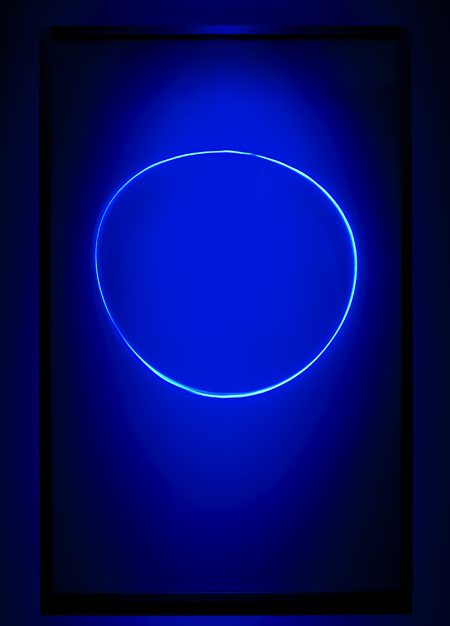 Normally flooded with natural light even on overcast days, Hiram Butler Gallery has covered its windows to make room for a kind of light you need to be in the dark to see. With its neon-like red, blue and green shapes that seem to hover mid-air, it’s a light that will be familiar to admirers of James Turrell, the pioneer of the Southern California Light and Space movement, but the medium – holography – is a departure.

That’s fitting, since the untitled works on view represent departures from traditional holography, which usually features objects or still lifes that can be viewed from a range of angles. Because Turrell’s subject is light itself, not the things light illuminates, he says he had to make what most holographers would consider “bad” holograms – photographing a stand-in object with lasers, but dramatically overexposing the recording – to make a good Turrell, one without the “pickled light” he sees in most holograms. (In the case of the larger works, the success rate is about 20 percent, since it’s impossible to check the work along the way; the overexposure often creates flares that aren’t apparent until the hologram is completed.)

The results, however, are consistent with what Turrell achieves in many of his installations, which effectively sculpt light into a physical presence. He has compared this experience to “Plato's cave, where we are sitting in the cave looking at the reflection of reality with our backs to reality. ... We're actually made for this light of Plato's cave, the light of twilight.”

Indeed, the gallery isn’t pitch dark, but twilight dim. And in the case of the larger holograms, which measure between five and six feet tall, the viewer is part of the reflected reality, since Turrell reflects the light in front of the picture plane by putting a mirror behind the hologram.

These works, which are called transmission holograms, change the most dramatically according to where the viewer is standing; the projected image disappears entirely if one gets close enough. (The transmission holograms are keyed to specific frequencies of light – you’ll see the same blue or red beaming onto the prints that reflects off them – while white halogen lights illuminate the smaller, crisper reflection holograms, which measure about 18-by-24 inches.)

As such, these “bad” holograms do what Turrell has always done, which is to take his insights into perceptual psychology into the art world. They are ultimately closer to events – conditions that make viewers aware of the act of seeing and the conditions that make it possible – than objects.