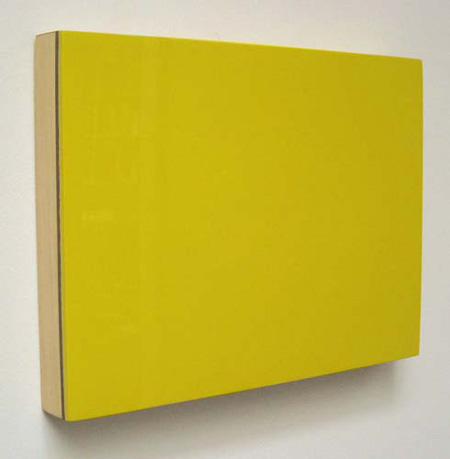 As perfect a summer show as you could ask for, septuagenarian painter Maxwell Hendler’s first solo exhibition here marks a homecoming of sorts, since the artist grew up in Houston. But the minute you lay eyes on his seductive, glassy poured-resin paintings, you’ll think of – maybe even pine for – Los Angeles, where he’s earned his reputation as painting’s heir to the 1960s Finish Fetish sculptural movement.

Mostly small or medium-sized, each painting consists of layers of resin tinted single color – make that a singular color, the kind you’ll struggle to find words to describe – poured over Masonite and obsessively wet-sanded to custom-surfboard perfection. When the paintings, which come with contagiously exuberant titles like "Love’s Attire," "Embrace Me" and "Dude," start with a white or blue ground underneath the tinted resin, they glow around the edges in a way that calls to mind the California Light-and-Space movement, particularly Doug Wheeler’s installations.

Their undeniably Southern California origins aside, spending time with Hendler’s paintings is like sucking on a hard candy as you duck into an air-conditioned building on a Texas summer day.