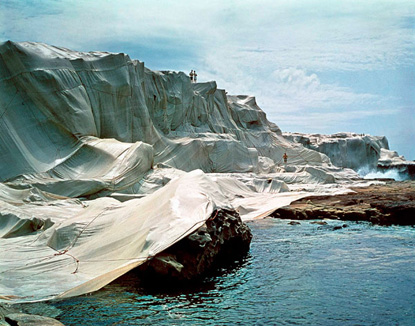 Not since 1986, when Chris Burden’s “Exposing the Foundation of the Museum” literally tunneled under the concrete floor of the exhibition space of what was then known as the Temporary Contemporary, has dirt been such a focus of attention. "Ends of the Earth: Land Art to 1974" becomes part of a cañon of conceptually savvy and historically rich exhibitions that includes "Out of Actions" and "Reconsidering the Object of Art 1965-1975." The exhibition is thorough and intriguing. Its young curators: Phillip Kaiser and Miwon Kwon have done their research on the 80 artists who've been included. Those most associated with the rise of "Land Art" in the 1960s – like Robert Smithson, Richard Long, Dennis Oppenheim, Jan Dibbets and Mary Miss – are present, but the curators also crossed the globe to include many others who have created land art and interventions outside the United States.

As in any show whose date ends in 1974, but especially for work based on an outdoor scale, much of the work shown must be via video documentation or has been recreated. Nonetheless the relationship between now and then is strong, as reconstructions of Alice Aycock’s “Clay #2,” Richard Long’s “A Line the Same Length as a Straight Walk from the Bottom to the Top of Silbury Hill,” and Robert Morris’ “Earthwork aka Untitled (Dirt)” attest. Collective post-war Japanese Group “I”, Italian Arte Provera and German Zero members’ works confront projects such as Israeli artist Micha Ullman’s 1972 swap of earth dug from opposite sides of the Israeli/Palestinian border.

Issues such as political and social boundaries and exploitation of the environment, brought into the aesthetic discourse when artists like Helen and Newton Harrison broke away from the exclusive use of traditional sites and materials for art, remain relevant globally today, indeed more so than ever. While recreations can be disappointing, as they are often presented out of context, they are frequently the only way to view pieces that were site specific or left in the landscape, particularly when gargantuan in scale. Dated is one thing these are not. The works have generally withstood the test of time and appear fresh and relevant.