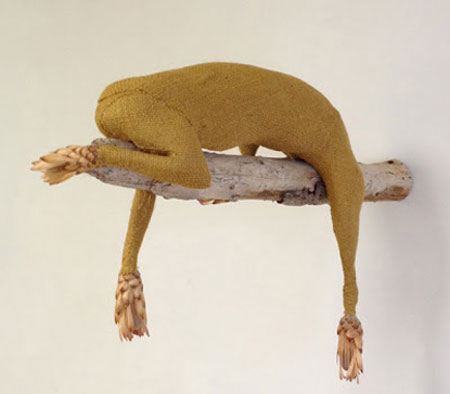 Through a multiplicity of materials and mammal morphs, there are two prominent species in Misako Inaoka's current exhibition, titled “Muted Imprints.” First, there are the would-be cyborgs, the techno-kinetic pieces such as “Surveillance Deer.” With the body of a fawn, metal peg legs, and a rotating toy-camera head, it feels more gimcrack than cyborg. “Surveillance Deer” stops at the level of technological suggestion rather than going the full distance of the cyborg – that is, merely having a real, functioning camera as the creature's head. Still, the effect is to catalyze a feedback loop of visual information that implicitly integrates the mammal into a vaster network.

Second, and more successful, there are the non-technological though uncanny and eldritch animals of simple otherness. Lounging on a log, “Pine Hands” seems a green headless sloth with pinecones for paws. Made from feathers, turf, foam, wood and paint, “Spider” is at once cute and creepy, primordial and futuristic. Its spindly wooden legs suggest the arachnid of the title, while the soft round pate looks like a tribble from "Star Trek's" USS Enterprise.