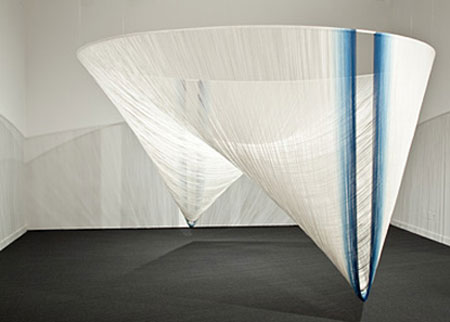 A engaging variety of large-scale fiber works — ranging roughly from 157 inches in length (Akio Hamatani’s "W-Orbit") to 51 by 39 by 10 inches (Hiroko Watanabe’s "Red Pulse") — mostly sculptural, hang from the ceiling, sit or spill onto the floor, and protrude from the walls in this exhibition of textiles. Color abounds: bright oranges, pale yellow, deep pink and white, blues, gold, and natural beige.

For this first of a two-part exhibition (part two will open a week after this show closes), fourteen Japanese artists, all of whom are involved in the global fiber-art movement, are represented; the show features one piece by each. The works do share the similarity of all being created with textiles — which vary considerably: cotton, silk, paper — providing an overall feel of hand-hewn craft and organic texture. The exception is the shiny work by Machiko Agano, who employs printed-on mirror sheet to create mobile-like hanging work. All of the works are abstractions.

But that is where the similarities end: here we see the range of what artists can create with these materials, pushing craft beyond convention. These pieces are, to be sure, as much about fine craft as they are about expressing vision and artistic voice. Throughout the show, whatever the technique, the skill is impeccable.

Some works are almost ethereal in their lightness while others are dense. Some artists, such as Agano, employ technology; others have developed their own techniques, such as Naoko Serino, who shapes thin layers of jute over forms (which are subsequently removed) to create airy, light-filled sculpture. Still others utilize identifiable tradition, such as quilting, felting, and weaving.

Using cotton thread and felting, Akiko Kumzawa created the white and deep pink "Daisy Chain." The title alludes to modern computer hardware, and the piece is made up of linked-together pieces that form a large oblong loop. The reference becomes equally reminiscent of the flower daisy chains the artist used to make as a child. Each piece is a white doily-like creation, gathered into a ball at the middle that is covered in pink felting. The felting spreads over the white, ending in vein-like threads; the resulting appearance is of a nipple or womb-like enclosure. Easy connections can be made, then, to maternity and the collective beauty of women united.

Perhaps the most evocatively beautiful work of the show is Yasuko Iyanaga’s "A Gift from the Sea: Air X." Made of wire and white silk, with tie-dyed accents of yellow and orange, this flowing, intricate, gossamer work has the appearance at once of a wedding dress as well as a creature of the ocean. The work was inspired by the artist’s trips to the islands of the south seas. Light plays off the many folds in ways that are similar to how it plays off of water; the sunshiny colors glow, serving to illuminate the piece from within — there is life beneath the surface.

Alongside these free-form works are several that have a more ordered or prescriptive approach. For instance, the colorful, rectangular, densely-woven wall-hung rugs by Tetsu Kusama; the grid-patterned fiber and iron work of Takaaaki Tanaka; and Serino’s jute sculptures. Taken as a whole, the variety results in a soothing balance, a well-crafted symphony of texture, tone, and fine artistry.