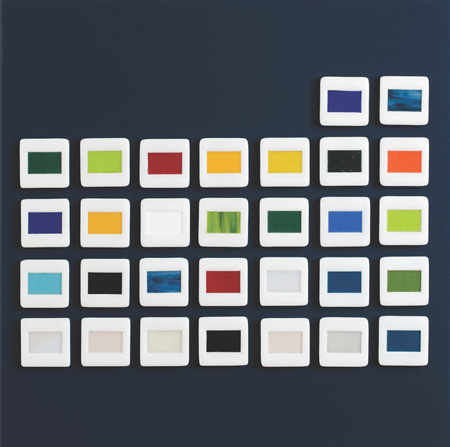 A powerfully affecting follow-up to "Reminders," her 2010 exhibition, Mel George expands her formal vocabulary in the current show. "Hazy" continues to explore career-spanning themes of memory and homesickness.  A native Australian, George lived in Portland from 2002 to 2009, then returned to her native Canberra. During her time in Portland she pointedly missed the geography and culture of her homeland, but upon returning to Australia she was surprised to find herself longing for Portland. Naturally she began making artwork to express those feelings of longing and loss.

Among those works was "West Bank," a highlight of the 2010 show, in which she created 100 kilnformed-glass squares, each resembling a Polaroid picture, and lined them up in a row. Each “Polaroid” was pink-hued in remembrance of the cherry trees that bloom along the Portland waterfront each spring. The conceptual and formal framing device in this piece was the jumping-off point for "Hazy," a title that refers to the increasing haziness of the artist’s memories of her seven years in the Pacific Northwest. The combination of a rectilinear framing device — the Polaroid in 2010 and now the motif of the photographic slide — is apropos for a body of work in which hard edges and softening memories are bracingly counterposed.

It is also appropriate given the genesis of this project. Last year, the artist was awarded a Stephen Proctor Fellowship by her alma mater, Australian National University. As part of the fellowship she traveled to Istanbul and Venice to study those cities’ historic tile mosaics. As a result of that inquiry she began creating kilnformed pieces that were related to mosaics in two ways: they were serial, and the whole added up to more than the sum of its parts. The most striking of the mosaic-based pieces is "Frame of Time." It is laid out like a calendar, each day represented by a square of glass that is framed with a white border, like a slide. Each day from April of last year to April of this year, she assigned each of the 366 “slides” a color, grouping of colors, or type of glass, as stand-ins for the events, locale, or mood of the day. Some incorporate metal leaf or glitter-like materials, some are striped, and some are flat color fields. The piece as a whole is a kind of diary, both conceptually and visually intriguing. It is a year in the life of a peripatetic artist, a year stretched across the wall in a way that is psychologically intimate but spatially expansive.

Another series that deploys the conceit of the chronological record, "Day One through Day Ten," evokes a ten-day weather forecast in hues of cerulean, white, and gray. Another series based on Portland bridges uses steel-framed settings resembling industrial windows. George renders the bridges in misty sfumato, their contours softened by memory’s dimmed by the passage of time. The use of framing devices extends into architectonic effects in works such as "Cloudy," "Partly Cloudy," and "Overcast," which hang above a wooden door form built into gallery partitions. They simulate the view of outside sky through an interior window.

Finally, one of the show’s most endearing pieces, "Slice of Sky," is a glass plane placed atop a short column. The plane shows another skyscape, which George intends as a kind of geographic wormhole through which, gazing downward, viewers can see the skies of the Southern Hemisphere. The work becomes a vehicle for travel through space, time, and memory. In this piece and across the exhibition, the artist turns simple symbolisms into sophisticated reveries that speak to the love of place and the heartache of yearning to be where we are not.