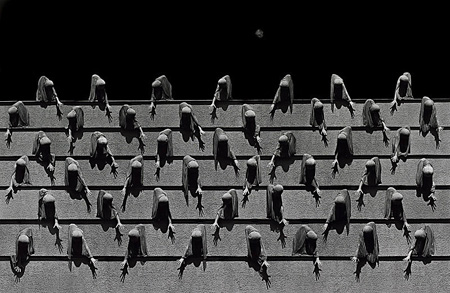 The individual works in “Shadows of the Dream” are parts of larger series, the earliest being the one for which the show is titled. “Renunciation,” one image from that series, establishes a narrative that is significant to Misha Gordin’s work on the whole. As absurd or surreal as the imagery may be — a man washing himself in the waters of the sea, bags overflowing with theatrical masks on the nearby shore — it speaks of the predicament of modern man, the meaninglessness of his existence. The masks are the man’s burden, and that there are so many of them bearing the same sorrowful expression conveys the artist's disturbing message.

Equally theatrical and staged are the photographs in Gordin’s “Crowd” series. They speak, on the one hand, of brotherhood and shared experience, and on the other of anonymity in the collective, the haunted visions of an artist who grew up under Soviet rule. “New Crowd 62” is perhaps the most effective of these: a single face cries out in agony from among the silent multitude.