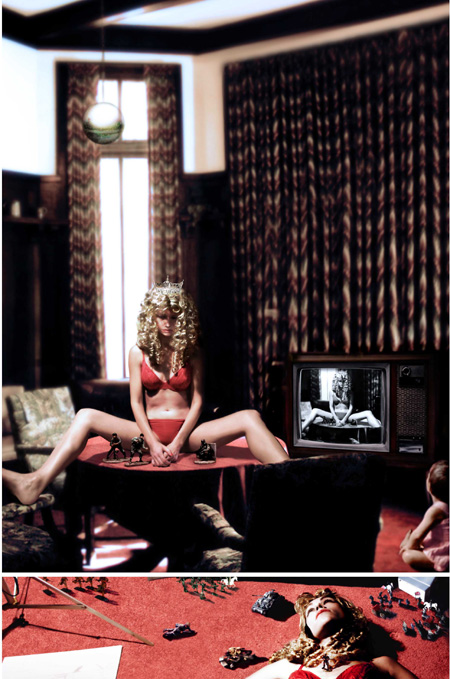 In "Pop Noir," a two artist exhibition exploring the intersection of popular culture with deeper issues of desire, perversion, even pornography, Carla Gannis creates a series of modern day Jezebels. While segueing from close-ups to wide-angle settings, these highly collaged and Photoshopped images are vibrant, employing intense reds. They are reminiscent of thirties and forties “noir” films. “Queenie,” a curly-haired, bikini-clad, full-bosomed creature, sits in a childlike pose, legs spread apart, while staring at an array of transformer toys spread around her. The effect, combining seduction with repulsion, evokes the controversial 1956 film, “Baby Doll," which starred Carroll Baker. Gannis’s “Rear Window,” paying homage to the iconic Hitchcock film, features a panoramic view of an urban courtyard. A closer look reveals a femme fatale, held by two sinister looking men and dangling upside down from a window, her long blonde hair brushing the side of the building.

The photographs and multi-media work of Sandra Bermudez employ sensual body parts. But these images have more deliberate pop aspects, while also drawing on the artist’s background in fashion design. In a series of four works from "Lip Installation" the artist photographed her own deeply colored red lips, with each set slightly opened in a puckered or about-to-be-kissed pose. By cropping these tightly and in a circle, the artist is sending an ambiguous message, suggesting that the images are vaginas or anuses. Her "Wallpaper" series, “American Pastoral,” consists of original works and actual reproduced wallpaper. Created to look like 18th century French toile, they feature naked teenagers frolicking in the forest and are presumably inspired by Abercrombie & Fitch catalogue photos. The artist’s ornate ivy themed collage pieces, affixed to the wall, allude to the drug wars in Columbia (her native country), and attest to her penchant for controversy as well as versatility.