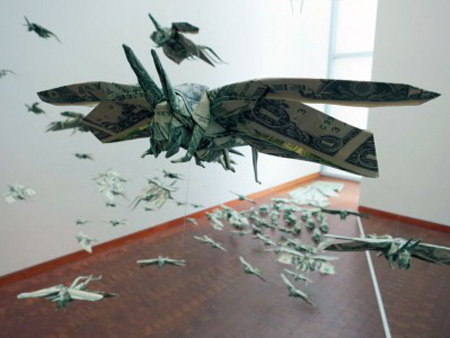 Origami art has moved into the post-Modern age by leaps and bounds, and this medium-sized but highly engaging show is a jaw-dropper.  "Folding Paper:  The Infinite Possibilities of Origami," curated by Meher McArthur, begins quietly with examples of what you remember as a child, such as that quintessential origami, the crane. There's even a tiny one here made by Sadako Sasaki, a young girl who as a two year-old developed leukemia from the bomb dropped on Hiroshima at the end of World War II. She recalled the legend that if you fold 1,000 cranes, your wish will come true – her's did not (she died at age 12), but her story became a rallying point for all those who pray for peace.

There are some astonishing artists in this show, many of whom (not surprisingly) come from mathematical, engineering, or computer backgrounds. Cranes are still in fashion, but someone like Linda Tomoko Mihara can fold multiple, connected cranes from one sheet of paper. Others call upon nontraditional techniques. Vincent Floderer uses crumpled tissue which he shapes and colors, creating quite convincing mushrooms and toadstools, corals and sponges.  Martin and Eric Demaine, a father-and-son team, Jeannine Mosely, and Polly Verity make origami which incorporate folded curves – creating elegant geometric  contortions in space. Robert J. Lang, considered the father of modern origami and whose designs are beautifully intricate, contributes a standing elk with flayed antlers.