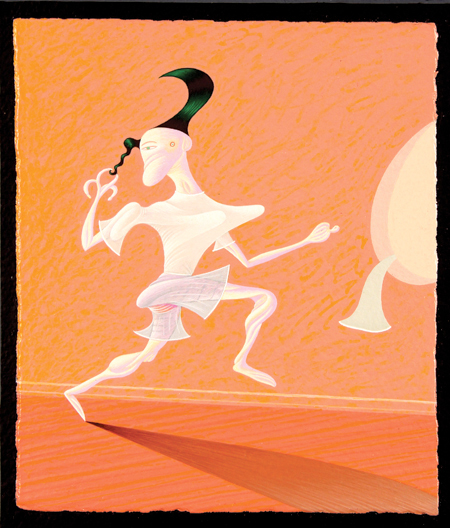 I'm convinced--Chicago is the best-kept secret in modern and contemporary art. Not the city, mind you: that's eked out its place as one of America's great population centers, our nation's third largest city and the capital of the Midwest, the inland megalopolis that even the POTUS is pleased to call home. In the history of art, Chicago is a well-respected place to be born or educated, and the list of major American artists who have done so is pretty distinguished, including Thomas Hart Benton, John Chamberlain, Judy Chicago, Walt Disney, Richard Estes, Tom Friedman, Leon Golub, Arturo Herrera, Joan Mitchell, Elizabeth Murray, Georgia O'Keeffe, Claes Oldenburg, Nancy Spero, Rirkrit Tiravanija, and Grant Wood. There are those who chose to stay and work in Chicago for much--if not all--of their entire careers, including Ivan Albright, Roger Brown, Richard Hunt, Ed Paschke, Martin Puryear, Hollis Sigler, and HC Westermann, while living and working in Chicago right now are artists such as Dawoud Bey, Nick Cave, Theaster Gates, Gaylen Gerber, Vera Klement, Riva Lehrer, Robert Lostutter, Jim Lutes, Inigo Manglano-Ovalle, Kerry James Marshall, Gladys Nilsson, Jim Nutt, Kay Rosen, Jason Salavon, Jessica Stockholder, Tony Tasset, Karl Wirsum, Mary Lou Zelazny and many many more. (Let's leave architecture out of this discussion for now, though if we included it, that would add even more luminaries.)

All right, all right, enough name-dropping--everybody has to be born and educated and live somewhere or other, and Chicago is a big place with a lot of art schools and a pretty active art center. The problem with such lists is that they can sometimes cloud the larger, thornier issues that are at stake whenever one examines the art of a particular place. Is examining place just a kind of local chauvinism, an exercise in place-patriotism? Or should that place be assessed on the basis of how significant a part it plays in the larger art conversation going on nationally and globally? Or, on the other hand, is what makes a place--in this case, Chicago--interesting is how distinct its voice is within those conversations, how independent and perhaps separate it can be, how some traditions and attitudes can be pursued there that make that place unique? Whichever way you look at it, it seems Chicago is of great significance, and the history of modern and contemporary art and culture is pretty much unthinkable without the names listed above. But still, as I travel and talk about Chicago, it's always surprising to me how few people around the country know the Chicago art scene, and how far a distance it is in terms of critical attention, between being America's third city than being its first or second. One might say, in terms of the realpolitik of American arts culture, Chicago has come in third in a contest in which there is only first and second place. So let's take a closer look at that last option, and consider Chicago as an independent art center that has carved out a special and distinct, though too often overlooked or misperceived, chapter in the history of modern and contemporary American art.

It does seem odd how many people resist the term "regionalism." To those who don't care for the word, it functions more or less as a synonym for provincialism, with a region somehow sounding less significant than a capital, implying a kind of a secondary status. But if one considers all art communities more or less as regional, including, say, Paris or New York, then regionalism is just a way of assessing the particular histories of particular places. Some regions are huge and magnets for artistic creativity and can be understood as historically dominant--again, Paris, New York, etc.--while others are mid-sized, some rooted in a city, or a larger geographic area. And sometimes--actually, pretty often--in these places, over a period of time, certain common attitudes and procedures can be discerned in ongoing generations of artists who mine somewhat similar visual terrain. It is then that you have the makings of a regional style, or at the very least of a regional attitude.

So it has been in Chicago. From the days of Ivan Albright (1897-1983), through the Monster Roster of the 1950s, into the great age of Chicago Imagism beginning with the Hairy Who exhibitions in 1966, and to the work of younger artists as well, there are a group of core considerations that one could accrete into a sense of a Chicago attitude or style in the visual arts. Here's my mega-list: an overwhelming commitment to the human figure, often presented singly, as the central vehicle of artistic expression; predilection for small-scale work scrupulously and fastidiously crafted toward a kind of finish fetish with evidence of the process of making suppressed; tendency toward a surrealistic view of the figure, sometimes abject, sometimes comic; a nurturing of obsessive and idiosyncratic vision and an attendant deep interest in self-taught and non-academic artists; a preference for high-keyed color and dense and often symmetrical compositions; a kind of blue-collar take on mass culture, a witty and often tongue-in-cheek embrace of the lowbrow; a pursuit for source material in vernacular rather than elite culture; and a tendency within individual careers to a kind of tunnel vision or pictorial stasis with a long retention of a signature style. All these things--and they could be spun out further--describe something different than the art produced contemporaneously in New York or Los Angeles or elsewhere, and with endless permutations can be seen form the bedrock of the Chicago attitude.

A quick disclaimer: there's no such thing as a "Chicago artist," there are just the men and women who live and make art here. There's no lockstep unanimity of attitude or focus, and there are fine local exceptions to much of what is described above. But there has been a certain trajectory of artistic emphasis in Chicago for an extended period of time, much of it centered on a determined representation of the human figure as under some kind of stress, psychological or physical, and almost never presented as an ideal form but as some compendium of mania, strange and changeling. From Albright's stunning immersions into flesh as decay, as existence always on some headlong lurch toward death and decomposition, to Nutt's lifelong figural obsession, from his early scatological and sexual fixations to his later, hyper-refined and excruciatingly delicate studies in personality and physiognomy; from Paschke's electric-zip head-hunting to Nilsson's teeming and gentle proliferative universe, it's like the boxing trainer's cry, "the body, the body, the body, the body." (It's almost no surprise that the canvas Paschke was working on the day he died in 2004 was a painting of a boxer. It's on YouTube.)

Paschke, Wirsum, and Nilsson, and others previously mentioned here such as Brown, Lostutter, Nutt, and Sigler, are all variously described as part of the Chicago Imagist movement. While terrific artists such as Albright, Gertrude Abercrombie, Seymour Rosofsky, and others worked pretty much singly in Chicago, though sometimes in loose affiliations, the first time things coalesced into what could be termed a true art movement began in 1966, with a series of group exhibitions held at the Hyde Park Art Center that would come to define Chicago Imagism. Along with Art Green, Phil Hanson, Christina Ramberg, Suellen Rocca, and Barbara Rossi and some important affiliated figures such as Don Baum, Phyllis Bramson, and Ray Yoshida, Imagism expressed the exuberance and irreverence of youth culture of the time, as a seeming endless chain of young artists, almost all trained at the School of the Art Institute of Chicago, exploded on the scene.

While evolving over time as a more--but never fully--organized movement, more like an accretion of a succession of like-minded groups, Imagism did present an alternative to what was coming out of New York in its sheer insouciance and refusal to accept the complicit and stable connection between art and mass communication that Pop Art espoused. (The relation of Chicago Imagism to the contemporaneous San Francisco Funk movement, another great moment in modern art regionalism, is more complex.) Imagism was not without a sense of adolescent rampage; whatever it was, Imagism seemed against it, or at least ready to poke fun at it. To many, it seemed juvenile, vulgar, and provocative (in retrospect it's not surprising that in the midst of these Hyde Park exhibitions, the Summer of Rage took place in Chicago's Grant Park, during the Democratic National Convention in 1968). Imagism was naughty, and offered a violent and salacious play on the human figure that has rarely been equaled--obsessive, and driven by what seem almost unmediated but scrupulously rendered fantasies.

And it set the tone for much of what would follow. While some of the artists--Brown and Paschke in particular--went on to significant national careers, it was the sheer number of the Imagist artists, almost all of whom became professors at one or another of the local colleges, that established Imagism as Chicago's signature style. (There are strong and distinguished MFA programs at the SAIC, of course, but also at the University of Illinois-Chicago, Northwestern, and the University of Chicago.) Students such as Tom Friedman and Jim Lutes--the latter from Washington state--who heard of the city's independence as an art center and its long embrace of idiosyncratic thinking, found Chicago a good place to come and study (or, in Lutes' case, remain and become a professor himself), generationally continuing the legacies of Imagism.

Of course, none of the artists who have emerged in Chicago in the last 20 years or so would call themselves Imagists--that designation is largely restricted to those Hyde Park Art Center artists from the 1960s and 1970s, a number of whom are still working here. But many were trained by them, and others in their own way take up aspects of the Chicago attitude toward art-making. While, as noted earlier, there are many streams in Chicago art, including conceptually-based artists, abstract painters, photographers, etc., and the community would be unthinkable without them, I'm struck by the sense of continuity one can still draw from the Chicago's past to Chicago's present. Whether it's Jason Salavon's brilliant computer programming that digitally collapses hundreds of figures into some revelatory composite iconic image, or Tony Tasset's scrupulously crafted, witty send-ups of vernacular culture, or Jim Lutes' working class pursuits of the ambiguities inherent in the abject and mundane, or Riva Lehrer's examination of disability as extending our consciousness of the body, or Scott Reeder's straightforward but teasingly subversive wit, or Paul Nudd's scatological obsessiveness with the allure of bodily function--all these to me echo and extend their predecessors, and are hard to imagine without Westermann or Nutt or Albright or Paschke. It may all be about more an attitude than a style, per se, but traditions are powerful, and Chicago is a place of long memories and deep loyalties. After all, either place matters or it doesn't, and the history of Chicago art seems to argue that it most certainly does.