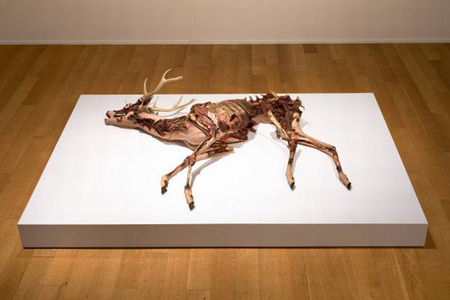 At once super realist and baroque, reminiscent of the work of Duane Hanson and Caravaggio, Erick Swenson’s objects are accessible and inviting while also daunting and ominous. His is sculpture that beckons viewers, mesmerizing them in its infinitesimal detail while uniting them further through the shared theme of survival. For Charles Darwin, the survival of a given species was a matter of natural selection: adaptation to change and the hardy will to compete and procreate. Using more poetic terms, Sigmund Freud described this struggle in terms of thanatos and eros, the death drive and libido. In form and conception, the three pieces by Swenson exist there, in the tension-filled space between death and life, the grim reaper and sex.

A pudendal form, “Scuttle” is a large meticulously detailed conch shell inside of which sits the viscous body of a sea snail halted in the midst of its scoot. Rose colored, glistening, and visceral, the elongated end of the snail’s body emerges from the shell erect, while its broader half wraps around the hard outer shell, squeezing its backside. It is an object at the threshold of life and death, its fleshy presence entrails turned inside out, succumbing to its own suicidal strangulation. Since “scuttle” is a nautical term that refers to the defensive act of sinking one’s own ship to block an enemy, the snail’s deadly involution of the vulnerable against the protective – the fleshy internal body that wraps itself around the protective carapace – becomes a metaphor for intense dynamic competition.

A large beer stein covered in hundreds of snails sitting atop a tall white pedestal, “Schwärmerei” brings the skirmish between life and death to the scale of the crowd. The title translates as “swarming” from the German, and refers to the heap of shiny snails, which, piled on top of each other, slither their way to the yeast within, which, when concocted as beer in liquid form, is a deadly poison to snails. Though coined in the 16th century, the term “schwarmerei” is associated with the crowd psychology and mass manipulation of the Third Reich in 1930s Germany.

The latest in a series of works by Swenson featuring deer, “Ne Plus Ultra” is a partially decayed buck lying on its side. It is an open, rotting body, with muscle and bone weaving together along hindquarters, through the rib cage, and up to the maw. It is a statement about entropy at work. In a particularly lyrical bit of gruesomeness, a long row of the buck’s teeth appears through the side of its mouth. The title “Ne Plus Ultra,” meaning literally “nothing beyond this,” is a Latin term used in early modern cartography to refer to unknown lands. The bones bear scrimshaw, tiny etchings of scenes from maps and coastlines. Together, title and etched bones bear a sense of memento mori – though we struggle to survive, death awaits all.