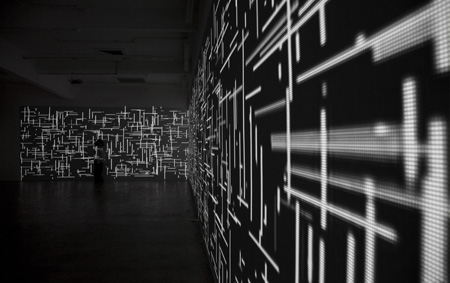 If you are unfamiliar with the work of Esteban Lisa (1895-1983), you are not alone. Though he was a staunch pioneer of Latin American abstraction, and a selfless educator/philosopher who brought modern art to Argentina, Lisa's paintings were never displayed during his lifetime. In fact, "Playing with Lines and Color" (paintings on discarded cardboard and paper) is Lisa's first solo museum exhibit in the United States.

Venezuelan artist Magdalena Fernandez (b. 1964) is also largely unknown on the west coast. How fortunate we are, then, to have her enormous mixed media installation, "2iPM009," on view in tandem with Lisa's small paintings.

Not knowing what to expect, you'll venture forth to explore what is billed as "a dialogue between modern and contemporary Latin American abstract art." To say the conversation is impressive is a vast understatement. Each show by itself is a knock-out; together they are revelatory.

To fully appreciate Lisa's work, you have to know a bit about his background. Born in Spain, his family immigrated to Buenos Aires when he was twelve years old. But Lisa's intellectual roots remained in European art and culture – especially his belief in the relationship between science, art and philosophy. Largely self-taught, Lisa considered himself a thinker and teacher, an idealist/humanist who regarded abstract art (informed by philosophy, science, aesthetics, music and ethics) as the basis for creativity and spirituality. In the 1930s he explored a connection between the abstraction of line/color in art and the mathematical symbols/diagrams of physics. In 1955, he founded the Escuela de Arte Moderno de Buenos Aires, while also teaching aesthetics to Jewish, European, and Arab adults who immigrated to Argentina.

According to Lisa, "Art is not making things, but reaching an inner state of being which makes creativity possible." He carried a dog-earred copy of Wassily Kandinsky's essay "On the Spiritual in Art," which called for a new visual language of color and rhythm. In 1956 Lisa wrote "Kant, Einstein and Picasso," a treatise that illustrated his concept of abstraction. It centered on Einstein's theory of a four-dimensional universe. (If one considers "infinity" as the fourth dimension, abstraction has meaning that can become a visual equivalent to Kant's notion of space.)

Lisa also felt a kinship to the aesthetics of Miro, Mondrian, Picasso, Klee and Hartung. Drawing from musical harmony, mathematic symbols, Kantian intuition and Einstein's theories, he believed that art was the means to enrich human existence and elevate human consciousness. That's quite a mission for a self-taught artist who had no interest in personal recognition. As a result, Lisa remained passionate about creative thinking – and its relationship to abstract art – until his death in 1983.

After eleven successful years of studying and working in Europe, Fernandez moved back home to Venezuela. By then, light and movement had become essential elements in her oeuvre – as is evident when you walk inside her monumental installation. Inspired by Mondrian's "Composition in Line" (a 1917 composition of black and white, horizontal/vertical lines), Fernandez programed several video projections to create landscapes of dancing black/white patterns that reflect the sound of rain. When the rain starts, the pattern is splotchy and the sound is soft and intermittent. When thunder roars and the storm increases, the projections create a downpour of stripes that surround viewers.

Please note that no musical instruments are used. The sounds of rain, storm, and thunder are created by "Perpetuum Jazzile Choir" (a chorus of hands that clap together or slap parts of the body). In short, Fernandez orchestrates a phenomenal experience through the use of art, science, nature, and technology. Ya gotta see it to believe it.