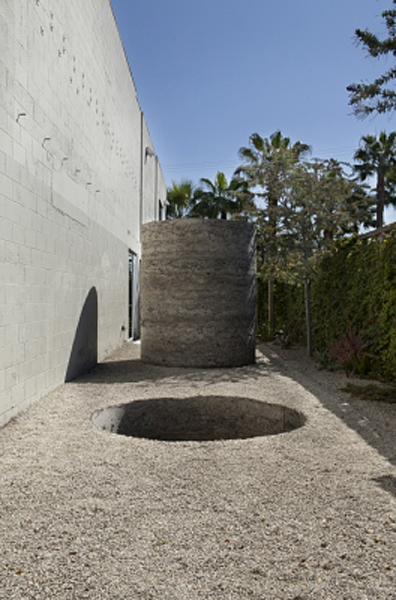 "The Art of Mono-ha" has most of the hallmarks of a Pacific Standard Time exhibition: a group show of ambitious work, made in the late '60s/early '70s (as well as several that were recreated for this show), and artists working within the Pacific Rim. The fact that the artists are Japanese, not Southern Californian, however, sets it apart. Mono-ha, or "school of things," may be perceived as coalescing gestures in minimalism, process art and earth art. While some works in the show may feel dated, a response that could just be our Westerner's bias, many other works remain ambitious achievements some 40 years after their initial creation.

Of the 10 artists involved, Nobuo Sekine makes a particularly memorable impression, most notably through his outdoor sculptures. "Phase of Nothingness" is a nearly 15 feet high, mirrored stainless steel monolith topped by an oval, granite boulder, and "Phase-Mother Earth" is an earth and cement cylinder which is mirrored in absence by a same-sized hole in the ground. Inside the galleries, his "Phase of Nothingness-Water" features a pair - one circular, the other rectangular - of steel and lacquer vessels filled to the rim with water, the water becoming extensions of the dark surface itself and acting as a smooth-surfaced finish as viewed from certain angles. It's a concept that predates Charles Ray's ink-filled box by about two decades.

Another standout is Kishio Suga, whose works include "Parallel Strata," a semi-minimalist wax sculpture originally made in 1969 and re-made this year, and "Infinite Situation II (steps)," in which sand is packed completely into all the steps in one of the back stairwells, turning it into a completely smooth decline that is both finite and, indeed, infinite, in its openness.