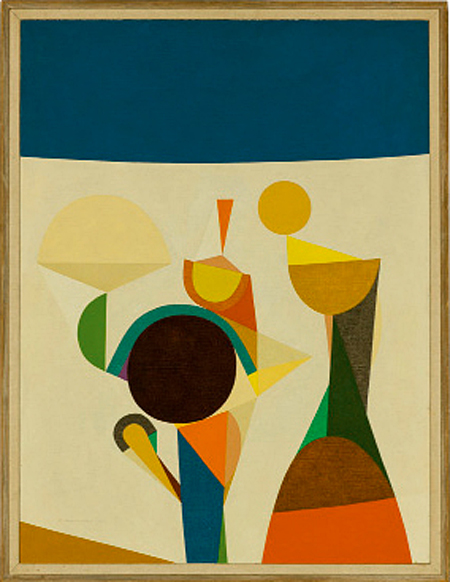 Frederick Hammersley (1919-2009) is best known as an abstract painter whose paintings of interlocking organic shapes brought him worldwide recognition. Hammersley is thought of as a close contemporary of a Southern California circle that included Karl Benjamin, Lorser Feitelson and John McLaughlin, although he moved his practice to Albuquerque, New Mexico in 1968 and remained there for the duration of his life. Hammersley was an educator as well as a prolific painter who early in his career transitioned from figuration to abstraction and it is for his abstract works that he is best known.

Hammersley reduced the world around him to essential forms and investigated both color and spatial relationships. His mature body of work can be divided into three categories, some of which are represented in this exhibition. For his "Hunch" works (1953-1959) he started with a colored from and added fifteen to twenty more shapes as a direct response to the one that preceded it. The "Geometrics" (1959-1964, 1965-1990) began as grids of nine squares where he then made two decisions: either to add a color or a diagonal. This resulted in a wide range of solutions. For the "Organics" (1964, 1987-2009) the only rule applied to the work was there could be no straight lines. Although Hammersley followed self-imposed rules to create his works, he is not associated with other artists who used systems, he is thought of purely as a painter of abstractions. In each of his series Hammersley used a different method of applying the paint to the canvas, producing works that either celebrated ("Organics") or masked ("Geometrics") the brush strokes. A dedicated formalist, Hammersley was less concerned with what a painting meant or signified than the patterns and relationships that could be created between forms and colors. That is not to say his that his work is without content or that his titles are arbitrary — they often involved word play and directed the reading of the the work.

Twenty small lithographs serve as an introduction to the exhibition. Each work is a three inch square surrounded by a hand carved frame that echoes the patterns within the work. These pieces are intricate and precious, and at this tiny scale contain everything that is articulated on a grander scale in his paintings. Based on a grid structure of sixteen squares, the works are all variations on a theme. Hammersley experimented with the density of the textures and the thickness and patterns of the lines that defined each part of the composition. He often printed the work on found images or fragments of paper that contained text, thus furthering the complexity of the compositions. These prints are gems that fuse collage and abstraction.

The exhibition carefully balances Hammersley's large geometric abstractions with the smaller organic compositions. Hammersley used color aggressively, and in a work like "Betwain" (1973) the tension between the red, black, and white shapes pushing at each other is powerful. "Swedish accent" (1994) plays with opposites as a yellow rectangle on a black ground is placed in opposition to a blue "T" on white. While many of Hammersley's paintings explored the variations and patterns between contrasting squares and rectangles, some exploited the power of the diagonal. In "Double duty" (1965), "I agree" (1980) and "Whether vane" (1980) large shapes painted black, white, red, or purple are bisected and mirrored across the diagonal, synergistically adding up to a complex composition from seemingly simple elements. Hammersley's abstractions are solid and forceful, where his smaller organic abstractions are softer and subtle. In his more organic works curved shapes surround each other. They seem to embrace rather than repel one another. An image such as "Ground work" (1964) suggests a landscape, yet Hammersley maintains the works' non-objective character.

In conjunction with the survey of Hammersley's paintings in the main space, a selection of works by Charles Garabedian from 1966-1976 are on view. The paintings and sculptures, both abstract and figurative, are early precursors to Garabedian's later works. The two untitled floor sculptures from 1967 and 1970 are abstract works that explore positive and negative space, whereas the paintings are figurative, and show off Garabedian's playful wit. Garabedian has a gift of combining the abstract with the representational, and in these early works his skill and sense of humor shine forth.

It is always interesting to see how an artist begins, and how their works reflect the times and how styles and ideologies develop as they progress from young to mature artists. Garabedian has had a long and prolific career and it is unexpectedly illuminating to see these early works placed alongside Hammersley's abstractions. There are multiple crossovers and similarities in their otherwise quite distinct approaches to painting.