''Interlopers''
at the Portland Museum of Portland, Oregon
Recommendation by Richard Speer 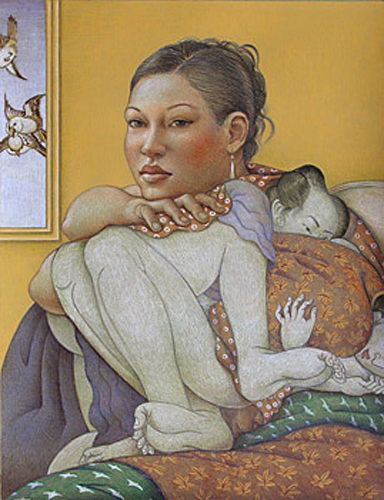 With it’s emphasis on draughtsmanship, “Interlopers” insists on the high style of drawing as an art form. Michael Bergt’s stylized imagery presents narratives of East and West that seem homages to artistic traditions of the past and how the past informs the present. His “Glance,” a work rendered in colored pencil, has all the presence of a mural by Diego Rivera and inspires speculation on his, apparently, myriad influences.

Michael Ferris Jr.’s “The Marriage,” is nothing short of revelatory as to how the archetypal breaks in upon a mundane domestic scene: a man and a woman, bringing the baggage of eons and of myth to the breakfast table. James Drake’s “City of Tells #1” and “City of Tells #2” may be superlative examples of the artist’s work; haunting mixes of ghostly imagery, representational abstractions that fuse historic and contemporary time. “Interlopers” is nothing if not far-reaching in its scope.