A Half Century of SECA Award Winners
Report from San Francisco, at SFMOMA
by christian l. frock 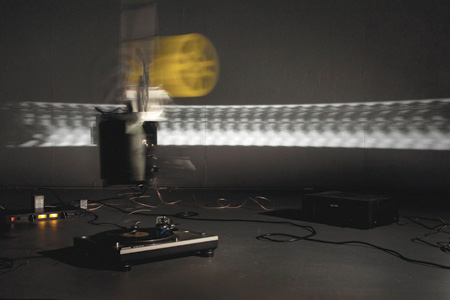 The Society for the Encouragement of Contemporary Art (SECA) at San Francisco Museum of Modern Art was formally organized in 1961 by a group of art-invested donors and museum supporters. It was and remains, more than fifty years later, an auxiliary that focuses on the professional cultivation of emerging artists. Through exhibitions, studio visits, public programs, and ultimately acquisitions, SECA aims to support both the local community and the museum, while broadening its collector base and institutional holdings. The SECA Art Award is a bi-annual exhibition that highlights a small group of artists who have not yet received major institutional recognition. Artists are selected from a pool of nominations solicited from the wider art community; resulting winners are then chosen through a series of studio visits. A catalogue accompanies the exhibition and each artist receives a modest, undisclosed cash award. This year's award exhibition features the work of Mauricio Ancalmo, Colter Jacobsen, Ruth Laskey, and Kamau Amu Patton. It also coincides with the concurrent historical exhibition, "Fifty Years of Bay Area Art: The SECA Awards."

The parameters of the SECA Art Award have changed over the years; initially, SECA members chose the artists, but the group elected to defer to the museum's curators in the mid-1990s, to confer greater scholarly attribution on winning artists. Past recipients include Barry McGee, Gay Outlaw, Hung Liu, Squeak Carnwath, William Allan and Rigo 98 (now Rigo 23), among others. The award has always been organized through SFMOMA's Painting and Sculpture Department. Whereas painting, works on paper, and sculpture once served as formal working parameters for the selection of nominees, this was loosened a few years ago to acknowledge emergent modes of practice that engage a variety of media, including sound and video. Prior to this shift, SECA's history is punctuated by a number of special awards for artists working in experimental design, film, video, photography and electronic media. Rebeca Bollinger, Jim Campbell, Paul DeMarinis, Carol Selter, and Post Tool Design (Gigi Obrecht and David Karam) are among the artists who received these singular distinctions.

Institutional awards are often contentious, especially within the arts community. The SECA Art Award is no exception and choices are often debated as "safe" or "conservative." There are, of course, numerous great artists who have not been recognized by SECA. But a long view of the award, illustrated by the concurrent exhibition, reflects a willingness to support work that defies traditional institutional presentation. Bonnie Ora Sherk and Howard Levine, Terry Fox, and Stephen Davis were recipients of the SECA Vernal Equinox Special Award (1970-1972), a grant for the production of conceptual work in public space that seems to have anticipated contemporary public practices. More recently, 2006 SECA Award winner Amy Franceschini's Victory Gardens 2007+ investigated the use of city space for functional urban gardens. During the following award cycle, Trevor Paglen's research-based artworks delved into real life covert military activities. These recent awards reflect how the SECA has evolved to allow consideration of Bay Area art practices engaged with other disciplines and socio-political concerns.

An overview of the work selected by SECA defies categorical assumptions, beyond a consistently high commitment to craft. Certain themes arise--the urban and natural landscape, cultural memory, modes of production, and so on--but for each theme that might seem self-evident, another strand of inquiry can be extracted. It is worth noting however, that most of the artists featured in SECA exhibitions create work that reflects the concerns of their milieu, across a spectrum of strategies. In other words, the work is contemporary in the truest sense. Artists such as Kota Ezawa and Tauba Auerbach both draw from graphic disciplines to create visually reductive images. Josephine Taylor, Desiree Holman, and this year's Colter Jacobsen each bring breathtakingly hand-rendered narratives to the fore, while artists such as Chris Johanson and Rosana Castrillo Diaz concoct elaborate constructions from humble materials. For his award exhibition, Johanson created an installation from found wood, while Castrillo Diaz's featured work was constructed from loops of scotch tape.

Despite wide-ranging approaches, the works honored in this year's SECA Art award all tend to interrogate our hurried relationship to time. Both Mauricio Ancalmo and Kamau Amu Patton engage the radical disparity between outmoded and state-of-the-art technology in their works; Ancalmo's installation utilizes recently antiquated equipment, such as found film footage, a 16mm projector, and a turntable. The projected film is activated randomly, without intervention, zipping around the room and landing on various walls of the gallery. The media component of Patton's installation is subtle: audio is activated by the movement of visitors in the gallery, creating an almost accidental interactive component that might go unnoticed by a casual viewer; the paintings and drawings on display are generated in relationship to noise and interference in the studio. Ruth Laskey's understated hand-woven textiles require an informed understanding of her labor-intensive process to garner full appreciation, as do Colter Jacobsen's picture-perfect images of the same scene, drawn repetitively from memory, each one astonishingly like the next.

The current survey reflects how the award has anticipated wider recognition for a number of artists who have simultaneously remained quintessentially 'Bay Area,' even as some have moved on to other locales. Former SECA Art Award winner Barry McGee is representative of the romanticized trajectory of institutional sanction, from that of anonymous artist working in the street to international art star, but that too is representative of the time period. Despite pervasive associations between San Francisco and the graffiti of the Mission School artists, McGee's work is but one example of the kind of work made in the Bay Area. By no means does the award offer a regional aesthetic or a comprehensive portrait of the diversity of local practices, but it has embraced its commitment to supporting local artists, a task few other institutions have tackled with any consistency. In doing so, SECA has not only bolstered recognition for local artists within the community, but also raised the profile of Bay Area artists within the art cannon at large.