Mark Rothko
at the Portland Museum of Portland, Oregon
Recommendation by Richard Speer 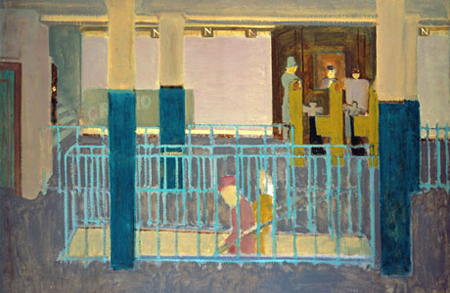 In the eponymously titled Mark Rothko, the renowned Abstract Expressionist (1903-1970) is feted with his first Portland retrospective. After emigrating from Russia at the age of ten, Rothko lived with his family in Portland for eight years, studying at the art school of the Portland Art Museum before eventually leaving for Yale and the international acclaim that followed.  Over the years, many in the Pacific Northwest have wondered whether the region’s misty atmospherics might have influenced what would become the painter’s signature style: vaporous swaths of color floating above one another in rapturous hymns to ethereality.

The museum’s chief curator, Bruce Guenther, who organized this exhibition, does not spend undue time on speculation, however, offering instead a wide-ranging tour of the artist’s trajectory from figuration through Surrealist experimentation and finally into Rothko’s maturity as an Abstract Expressionist pointing the way to color-field painting. The exhibition’s 45 works span not only a broad chronological and stylistic continuum, but also a multiplicity of scales, from intimate works on paper to wall-commanding canvases that tower over the viewer with washes of hypersaturated color. This is a thorough, imminently satisfying exhibition, much overdue in the city in which one of 20th Century art’s monumental figures spent some of his most formative years.