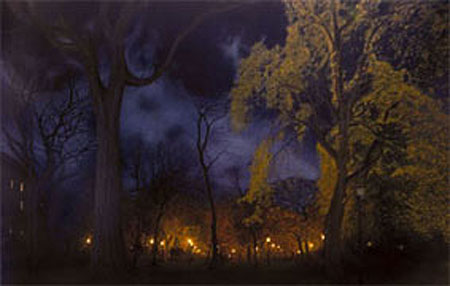 Peter Halasz is a young (in his late thirties) artist who has labored to create his own painting style, particularly in these seven new works, “Love Songs & Incantations.” These large oils on canvas or wood panel depict Halasz’s love affair with New York City’s parks and broad panoramas at night. Each meticulously rendered painting evokes a romantic evening, perhaps in an elegant restaurant on an upper floor, featuring a plate glass window overlooking an urban, yet bucolic setting. The scenes/paintings that the viewer looks out on - bridges, buildings, roofs, chimneys, lampposts, treetops - are all carefully lit by city lamps or ambient light.

The effect is a slightly ethereal look, adding to the sense that each painted scene is extracted from our collective memories. “Fountain at Tompkins,” a 44 1/2 x 52 1/2 inch close-up of Tompkins Square Park recalls the scenes of nineteenth century Currier and Ives prints. There are many large trees, their branches entangled among each other, a gazebo and that diffused light, perhaps in a snow-filled public space. The 84 by 162 inch “Rainscape from East Broadway and Canal” is a rain swept view of lower Eastside Manhattan, including the suspended Williamsburg Bridge, presumably viewed from a building’s upper story.  These paintings draw the viewer in, reminding one of art’s ability to open the senses.