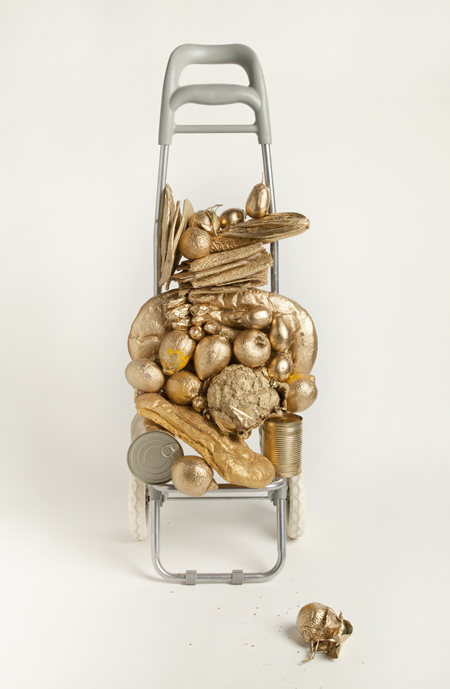 Continuing through March 23, 2011
As an aficionado of antiquities and all their respective baggage, in particular the museum artifact, Liz Glynn is nothing if not rigorous in her excavations and subsequent recreations of objects. She researches them, exhumes them, and runs them through a virtual gauntlet of de- and reconstruction. Past projects of note have included The "24 Hour Roman Reconstruction Project, aka Building Rome in a Day," an installation-cum-performance from 2008; "On the Museum's Ruin," from 2011, which included Corbusier chairs constructed out of, among other things, rubble from the demolition of the Fogg Museum; and, from 2009, "California Surrogates For The Getty," which consisted of vases and other ancient object surrogates that were assembled from the Getty's own trash, a project very much in line with this exhibition.

"No Second Troy" was born largely out of the story of Heinrich Schliemann, the 19th century amateur archeologist credited with having excavated the site of ancient Troy -- including the gold-encrusted jewels of Priam's Treasure, which Schliemann named after the king ? but who has also has been labeled a fraud for producing substantial quantities of bogus provenance. Long after Schliemann and his wife smuggled their finds into Germany and donated them to the National Museum (which later became Berlin's Pergamon Museum), in 1945 the Red Army confiscated the now-suspect loot. Later still, the Pergamon went on to commission the creation of copies of said loot. And this is where you begin to get a sense of one of Glynn's primary intrigues: the poetry and politics of copies, devoid of any true original. She recently described why she's drawn to such material in an interview: "I'm interested in the multiplicity of truths, stories, narratives, lies and justifications that have been told around the object. I think the artifact is quite literally a vessel (that) gets filled up with what people put upon it."

In addition to being an imperative, "No Second Troy" goes from calling out the objects' inconsistencies to both ritualizing and perhaps even mourning the disjointed and misappropriated march of history. But ritual is the operative word. The show will include three large (approx. 8'x8') video projections integrating the former Trojan region: "Footsteps," "Trojan Return," and "Untitled Epic Poem (after Homer on the shores of Gallipoli)." The latter, which was indeed shot on the shore of Gallipoli, with Troy in the distant background, features the artist wading ankle-deep at the lapping shore, holding and subsequently discarding - a la Dylan's "Subterranean Homesick Blues" video ? large canvas swatches painted with a series of the most violent words or phrases taken from the Iliad, among them "Burn a thousand fires", "A thousand shapes of death surround us," and "The dead forget the dead." "Footsteps" takes the viewer on a constitution-testing, hiking-boots-and-floor-focused amble from the Pergramon Museum to its neighbor, the Neues Museum, and later on to the Bergama in Turkey, and finally Troy, showing only downward-looking views of the marble, mosaic tiles, cobblestones, stone and dirt ruins, and wood steps that the artist trekked on her route. As videos focused on ritual in what is ultimately from a very removed emotional distance, they will very much depend upon the full context of the installation.

The core of the show will likely emanate from Glynn's "Trojan Surrogates," consisting of reconfigured artifacts - including earrings, bracelets and strings of beads - as well as a fragmented memorial. Large vitrines, approximately seven-feet high, will house a bounty of glowing but roughed-up goodies, including vases made from recycled trash and coated in gold-plated bronze, along with far less weighty recycled ephemera coated in copper and nickel-silver will stand in for the jewels. The obvious reading here is that the value of suspect, or un-vetted, treasure may only be skin deep, a façade, a superficial anointing with no 'there' there. Whether the added layers, literally, of semi-precious metals, lead to added layers, figuratively, of a once again further remove from the copies of copies, and that this then somehow becomes yet another cycling back to the presumably non-existent originals, remains to be seen.

The other major large-scale work will be a scaled version of a Russian war memorial in Berlin. It will consist of a concrete and rubber plinth with cast resin flowers extending from it, the whole thing broken down in to several pieces and set on pedestals. This more literal deconstruction circles back to Glynn's attempt to integrate, if obliquely, a reference to the gastarbeiter ? or guest worker ? movement of the 1960s and '70s, in which West Germany imported large numbers of immigrants to fuel their labor shortage. The Turkish eventually became the movement's largest nationality (a migration now most visible, at least on a vernacular level, through the ubiquity of German doner kebab joints), and, if you can accept the conceit, the Turkish connection may then be perceived as circumventing all the way back to the Battle of Gallipoli during the Ottoman Empire, and, in turn, back to Priam's jewels. The scope of "No Second Troy," for its own modest scale contemporary art context, appears to be worthy of Schliemann's large scale ambition, only in this case, instead of hiding the provenance, the fibers of authenticity will be turned completely inside out.