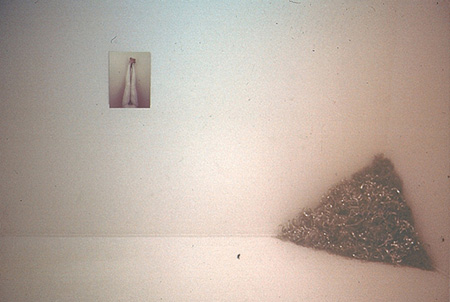 For Southern California, the art game is played on the fields of the schools - Cal Arts, UCLA, Art Center, Otis, Claremont and UCI. On the brand new campus in Irvine, in 1964 there was very little distance between the young faculty, most of whom were still building their careers, and the gifted students. Everyone, from Robert Irwin to Chris Burden and from Vija Celmins to Alexis Smith, got famous together. UC Irvine in the late sixties and early seventies was a raw campus, and the art program had no shape beyond “conceptual.” It was possible in 1971 for then student Burden to lock himself into his own locker for five days and earn his MFA degree.

What is interesting about the students is precisely how much they differed from their mentors. Because of the sheer numbers of artists who visited the campus, taught for a bit, and then moved one, the cross fertilization at UCI was intellectual rather than morphological. In contrast to the object makers on the faculty, such as Ron Davis and Larry Bell, Burden’s early career was largely performance work. Included in “Best Kept Secret:  UCI and the Development of Contemporary Art in Southern California, 19674-1971” is Smith’s small collage “Flatlands” (1972), a preview of her career for the next two decades that remains free of the methodology of the exquisite “Ocean” drawings of her teacher, Celmins. The ground floor is dominated by Nancy Buchanan’s “Some Hair,” made from human and poodle hair. This work is wholly unrelated to that of her professor, Robert Irwin, other than as a rejection of painting. The distinguishing character of these relationships is they do not resemble the ordinary student/teacher dichotomy so much as artist-to-artist mentorships.