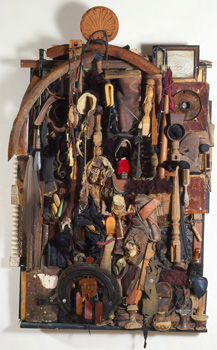 Continuing through January 8, 2012
Charles White’s lithograph titled “Love Letter” features an image of a somewhat melancholy looking African-American woman whose face is surrounded by abstract shapes suggestive of angel’s wings. The background, also composed of gray-toned abstract forms, surrounds a purple rose that can be interpreted as a spiritual allusion to the hope and perseverance that has sustained the black community in America for centuries. The entire composition can be interpreted as a love letter not only to an individual woman but to all the women who form the backbone of African-American society.

White’s lithograph is part of an exhibition that, one might say at long last examines the legacy of African American artists in the Los Angeles basin in depth, “Now Dig This! Art and Black Los Angeles 1960-80.” While some like White, Betye Saar, John Outterbridge and Noah Purifoy have become well-known in Los Angeles and beyond, for the most part they still mostly lag behind their (predominantly) white counterparts. Many, like Saar and Purifoy, adopted assemblage as an idiom that bridged gaps between folk and so-called fine art. Saar uses found/collected objects in visual storytelling that chronicles the black experience from its African origins to contemporary America. Curated by Columbia University professor Kellie Jones, “Dig This” brings a largely under-appreciated segment of American art to the eye of the general public (Hammer Museum, West Los Angeles).