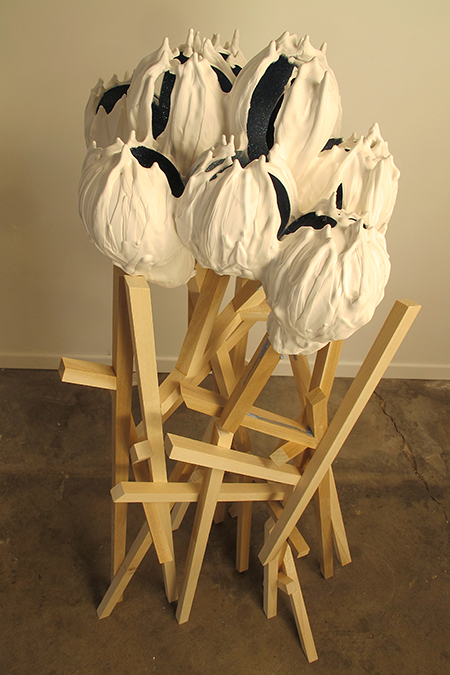 Mitra Fabian's pod-like forms made of poured white hydro-stone are lightly tethered to a jumble of long, unpainted wooden sticks.

Much of the charm in sculptor Mitra Fabian’s installations has been the way she turned everyday items from office or industry into unexpected experiences of natural grace and beauty. Stacks of blue medical pipette tips glued on two sides of a clear acrylic sheet became a floating, translucent iceberg. Draped rolls of unspooling cash register receipt paper, set on edge and pinned to the wall, were made by shadow and gravity into elegant curling nets. Even masses of cut up white paper window blinds carefully stacked on edge and glued to the floor could suggest an improbable flow of milky froth. While these installations had much in common with those by New York sculptor Tara Donovan who also makes visual transformations out of materials like plastic drinking straws or toothpicks, Fabian’s newest works strike out in a direction that is all her own.

Fabian’s sculptures in “Stratagems” are hollow, pod-like forms made of poured white hydro-stone that she lightly balances on, or tethers to, a jumble of long, unpainted wooden sticks. Through slits and openings along the orb’s surfaces we catch glimpses of glitter and color inside. In her past installations, by focusing on the surprisingly transcendent quality of repurposed man-made materials the artist seemed to subtly suggest that nature’s beauty might be an inherent part of all physical form. These sculptures, however, take a different approach to an intrinsic fusion of nature and the man-made.

Her sculptures of bulbous forms nestling amid haphazard armatures of stiff wooden stilts are curious industrialized/organic hybrids. Reminiscent of everything from masses of large fossilized blossoms, to dried splitting cocoons or emptied seed shells perched in tall grass, they encourage us to think about nature. But it is a weirdly unnatural nature we are presented with. The works' materials locate these pieces in the realm of manufacturing, hinting at things used in construction or hand built fabrication.

Fabian’s interlocking jumbles of wooden sticks have the cleanly milled, sharply cut and sanded look of fresh sliced lumber. Her pods all have the smooth, drippy, layered look of plaster slip molds that have been repeatedly poured into and emptied out.  Like strangely pale artificial geodes on stilts, the pieces exude a singular kind of fake allure. In “Transmission” the glittery pink color inside the lovely bulb-shaped white pods seeps out of holes on either end. That gives the suggestively shaped openings a rouge of pale lipstick and a glimmer of young sexuality.

Another work, “Trophy”, looks like a big, swollen maple key seed pod/insect pupa that has split open and dangles loosely by long thin wires from a nest of wooden rafters that cantilever off the wall. Made lighthearted by a bright green, glitter-coated inside it tries to merge an “Invasion of the Body Snatchers” kind of horrific silliness with visual references to heavy lifting by industrial cables and cranes. That’s an association dependent on scale, however, and better made by charcoal drawings that are also in this exhibit. Two such drawings, “Stock” and “Hoist,” show monstrous, limp organic forms dangling by cable and crane over a swathe of track houses or stacks of massive wooden beams. Part gigantic vegetable tubers, part flaccid sexual innuendo they project nature as not only overwhelming, but also overwhelmed by human manipulation. It’s an interesting direction with echoes in what we’re currently learning about farming and genetics, where manipulated nature is clearly taking on a whole sci-fi reality.